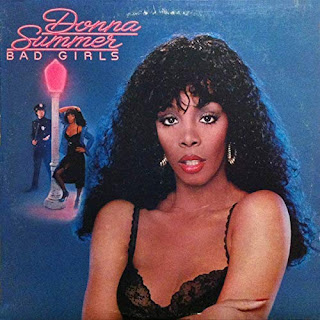 Inspired by our 1989 Turn That Noise Down (TTND) articles, Jimmy Hunter takes a look ten years further back to the music of 1979. This time, he looks back at the Donna Summer album Bad Girls...

I’ve said before that 1979 was the peak output for the (Giorgio) Mororder / (Pete) Bellotte duo and Giorgio Moroder in particular. However, as it turns out, it was to be Donna Summer’s peak year too – for musical output as well as commercial sales. Oh she had some fairly major and critically acclaimed hits throughout the ‘80s but she never reproduced the popularity she had as the queen of disco. There’s evidence she didn’t want to – at least not in the same way.

This album is a multi-award-winning piece of work that involved a large part of the Moroder/Bellotte and Casablanca network and I like it a lot. Joining the Summer/Moroder/Bellotte trio were some additional big hitters: Keith Forsey (Flashdance) and Harold Faltermeyer (Axel F) as well as Summer’s second husband, and Brooklyn Dreams singer, Bruce Sudano. On this album she also has tracks she wrote solo and produced – a first for her.

The format isn’t quite that of a concept album, although it’s getting there. For that I’d encourage you to listen to Summer’s 1977 Once Upon A Time concept album, the previous studio release to Bad Girls. Both structure and sequencing of both albums, however, are remarkably similar. Several of her previous albums were in fact concept albums and they worked very well.

For me, the album definitely has peaks and troughs – the height of 1979 disco fever, Summer absolutely smashes it out of the park with this offering and although it was her best selling studio album, even taking into account sales after her death in 2012, I’m divided over sides 2 and especially 3.

Hot Stuff - First single release and I’m in possession of 4 versions of this: 7” single; 12” single; album; greatest hits album. Depending on what version you have you’ll get a sax solo and / or a guitar solo and the guitar solo is performed by Steely Dan’s Jeff Baxter. It’s a departure from disco to something more rock oriented but still a dancefloor thumper. Particularly well known for later generations in the film The Full Monty.

Bad Girls - Title track, second single release and back to pure “toot-toot heeeyyyyy beep-beep” disco delight. Not the first time Summer has written about The Lady of the Night but this is from a different yet no less empathetic view. But for The Knack’s My Sherona, this would’ve been the biggest selling US single of 1979 (Hot Stuff was third). The whistle is definitely part of the hook and it has a great bass line too.

Love Will Always Find You / Walk Away - These two tracks have always seemed like an inter-course filler at a restaurant. They fit in because they’ve got a rhythm and certainly musicality and I think Walk Away (an unfortunate fifth and final single) is much superior in terms of structure and vocals.

Dim All The Lights - Third single (autumn ’79) and a track I really like – and Summer’s own composition. It includes one of the longest notes on record [hmmm, debatable – Ed] and it’s a good, solid upbeat track.

Journey To The Centre of Your Heart - B-side of Hot Stuff and always reminds me of a previous album frack from her but can never put my finger on it. Lots of guitars, strong vocal, musically it’s good, strong track and actually, signature Moroder / Bellotte. Perhaps that’s why I’m reminded of a previous track.

One Night in a Lifetime - A very catchy track and again moving away from a disco theme and she does this with her vocal. Like the previous track she has a country inflection and together with the bass it doesn’t sound like a disco track. Listening to this again I’ve realised I do actually like this a lot.

Can’t Get to Sleep At Night - Penned by Bob Conti whose CV reads like a who’s who of US soul/disco heavy weights, and Summer’s husband, Bruce Sudano. It’s a track that provides some light and shade to the album especially with the (Hammond?) organ and I do wonder about the sequencing here: should the previous track and this one have been tracks 3 and 4 on side 1 instead?

Four slow tracks all with Summer at the heart of them as a writer as well as subject, another first but they’ve not stood the test of time and I think they’re dated. I don’t much like her vocal on On My Honor (US spelling so don’t @ me!) nor do I like the music.

However I do like the second and fourth tracks for some reason. Track 2, There Will Always Be a You, seems a bit rushed. I love the vocal and there’s a musicality in the lyric that’s a throwback to a much earlier album so to my ear, it’s a more rounded track.

I don’t like All Through The Night. I didn’t think I’d hear saccharine rubbish from Donna Summer but here we are. I wonder if it’s the influence of Bruce Roberts, her co-writer. I don’t know but for me it doesn’t work.

My Baby Understands is not a track I should like, but I do. I hear brief glimpses of very early Stevie Nicks with this; it definitely goes off in the direction of rock and the album needs this – this is what helps it almost sound like “concept” yet somehow it doesn’t FEEL authentic.

Our Love / Lucky / Sunset People - The sound of disco summer 1979. When this album was released, U.S. DJs, almost en masse, took side 4 and just slammed the dancefloors with it. It subsequently became one of the biggest dance floor hits of the year. And here there’s a concept but listen to it: see if you can find it.

Our Love – aching with love for a partner who’s not there. Have they ever been? Will they ever be again? Fantastic thumping track with Summer in full voice.

Lucky – a chance encounter? Summer purrs out the lyrics to this attempt at portraying a need for love but gets a one-night stand instead.

Sunset People – the utter futility of L.A. and its stars and famous people captured expertly in a lyric that doesn’t really seem to belong to a disco track. Yet it works perfectly.


After this album, with a new track – On The Radio – already in the bag for a Greatest Hits Volume 2 and from the soundtrack of the film Foxes, a duet with Barbra Streisand already on release, Donna Summer turned her back, with little regret and some venom, on some of her past material: she acknowledged her addiction to prescription drugs and confirmed her stance as a born again Christian. She never subsequently managed to achieve the same ferocious level of output as the 1974-1979 era but perhaps that’s what she needed.

All in all this is a damn good album. It feels like it had everything thrown at it and it probably did, yet it’s not my favourite. As time passed I began to favour her earlier work and Once Upon A Time feels fresher, less glitzy and more creative but Bad Girls stands resolutely, and rightly, as one of the definitive and commercially successful albums of the disco era.

So, have a listen to side 4 in its entirety see if you can picture the same hot, bouncing dance floor that I can …