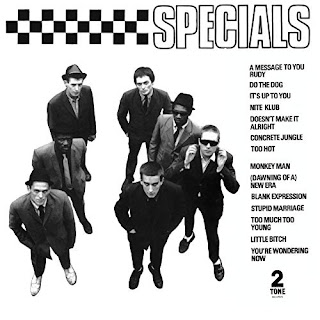 Inspired by our series of articles looking back at music released 30 years ago, Jimmy Hunter takes a step further back in time to give us a Song of the Day 1979. This week, he sends a message to you, Rudy...

We know that sounds and smells are very powerful suggesters and what's lovely is when you remember a record, some music or something personal that allows you to feel a memory. Do you know what I mean? For me this week's record does exactly that: The Specials featuring Rico with A Message To You Rudy.

Ska. 2 Tone. A sub culture in late '70s - a Britain that was pitched against popular (populist?) culture. The best way to describe this is not for me to labour the point - watch this fantastic documentary from a few years ago because it gives a great insight to how 2 Tone became such a phenomenon.

I absolutely loved the feel of what 2 Tone was doing and this was as much of a culture change as a shift or resurgence in a musical style with roots deep in reggae and Jamaican culture going back decades. It was also pitted against the political climate at the time.

The record itself has had many covers and I've listened to most of them. It's hard to be objective but I've tried and so my verdict is that this is the best version which is notably [what? - Ed] produced by Elvis Costello. I love the arrangement and I love the almost oompah (I said almost!) feel of the brass. The three voices (Terry Hall, Neville Staples and Lynval Golding) taking lead vocals works really well with the sound of the record.

Have a look at the official video here

The Old Grey Whistle Test was a BBC2 music programme (and very much missed) that gave airtime to so so many bands and it's a great performance by The Specials on TOGWT that I'd like to share here. Enjoy, Rude Boy!