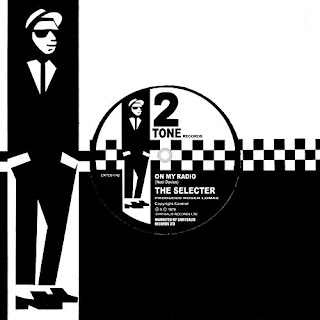 Inspired by our series of articles looking back at music released 30 years ago, Jimmy Hunter takes a step further back in time to give us a Song of the Day 1979. This week, he selects a song on his radio...

Belinda Magnus. Any ideas where I'm going with this? Yes? No? How about if I use her "stage name" - Pauline Black. Yes, there you go. Yes, this week I'm spreading some unbridled joy with a record that makes me smile and dance now as much as it did 40 years ago. Please welcome:

The Selecter with On My Radio.

Music aside, this woman is amazing. In recent years I've seen her a few times on the tellybox and she bounces around to this record the same as she did 40 years ago, except now she's in her 60s and she still looks really happy when she's singing it. The band is of course from the 2 Tone stable that made famous a number of talented Ska acts in the '70s and '80s.

A founding member of the band, Black was credited with the resurgence in popularity of Ska along with 2 Tone bands The Specials and Madness. But what first grabbed me was that she was in a Mod suit and pork-pie hat. The other thing that grabbed me was her voice - unmistakable and distinct from her Ska peers.

The record is written by co-founding member Noel Davies who went on to write the band's follow up material. Though they split in 1982 they've been reuniting since the '90s for various appearances and Pauline Black has remained very active, touring with other artists.

I'm listening to this performance as I write this and I'm smiling, despite the week long lurgy. I'm not going too dissect this as I normally would because I think it self explanatory.

"it's just the same old show
on my radio"

Ain't that the truth?! Black's voice alternates quickly to soprano and back and, quite frankly, take your pick of hooks - if the melody doesn't get your foot tapping then I wonder what would.

A year ago an almost 65 year old Pauline Black reunited with another band member and recorded a set for the BBC in Glasgow. Have a look and enjoy.