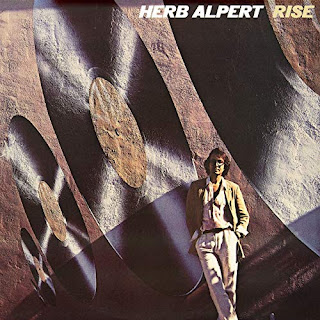 Inspired by our series of articles looking back at music released 30 years ago, Jimmy Hunter takes a step further back in time to give us a Song of the Day 1979. This week, he partakes of some herb...

I'll be honest with this one - my Mum bought the single so I instantly thought it to be incredibly uncool. I should've known better because she had good taste in music. Mostly. Apart from her obsession with Rod Stewart and her hatred of Kate Bush, we agreed on most things, musically.

I'm actually listening to it as I type - Herb Alpert and Rise (here's the full length version with a glorious time lapse of NYC - just because!).

It would take a far more knowledgeable and experienced person than I [hahahaha, oh we know - Ed] to articulate in a few sentences Herb Alpert's accomplishments but his career started around 1950 ish and I don't believe he's quite finished yet, at the age of 84. And not necessarily always with music.

He is the co-founder of A&M records (A - Alpert [I did not know this! - Ed]) and for 30 years was at the helm signing some very well known names (The Carpenters). An accomplished painter and sculptor, he's had several very successful exhibitions over the past 20 years. Don't you just wonder what it would be like to be so utterly talented?

But it's as a trumpeter that he'll probably be best remembered and this record just perpetuates the legend. It brought him big commercial success after almost a decade away from it (post Tijuana Brass years) and established him with a new generation.

The record FEELS latin to me - I can almost hear "mañana" echoing gently from the record deck and it's a lovely long stroll of a record. Before the trumpet starts we're treated to a delightful bass line that always puts me in mind of Bernard Edwards with a piano coming in on top providing the melody as part of the intro.

It has sections too and after the first verse / chorus we're in a chant section as various instruments come in and out before the trumpet starts again. Do this another couple of times and we have almost 8 minutes of latin jazz funk delight.

I wanted to find a live session of this and though the quality isn't quite as good as I'd like, here he is 23 years ago live in Montreux.