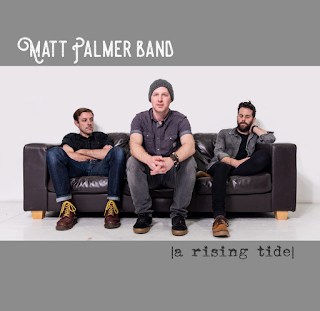 AlbieMedia's Song of the Day (SotD) is our choice of a single or album track that we think you need to hear. This time Susan Omand wants to introduce you to a new band...

One of the fantastic things, for me, about writing for AlbieMedia is finding new bands to listen to. As well as rediscovering classic (and not so classic) music that passed me by in the past with my very enjoyable #EducatingOmand reviews, sometimes a hidden gem of completely new music lands in my lap or, in this case, the work email inbox. That's exactly what happened a couple of weeks ago when we received a note from The Matt Palmer Band.

So who are they? The Matt Palmer Band is an alternative rock group based in South West England. As I chatted with guitarist-turned-frontman Matt Palmer by email I found out that he started off performing in bands on the Brighton live music scene during his teens including a stint with indie rock band Anemo. Now based in the South West, he formed his own band in 2018 by enlisting the talents of drummer and multi-instrumentalist Niall Robinson and bassist/producer Alex Jennings. He says that they "brought a broader palette of musical flavours to the mix, including the funk breakbeats of Jabo Starks and other influences from a wide variety of jazz and Motown greats."

Sounds interesting doesn't it? And you can pick up subtle shades of those influences in their debut EP A Rising Tide which came out on 10th October, although there's much more of a folk rock vibe for me. Matt's unique but compelling vocal floats effortlessly over complex percussion, which is very much front and centre in this EP mix, undercut by a driving bass and a very cool guitar sound, making extensive use of slide and feedback on a jangly (in a good way) electric lead that reminded me very much of Simple Minds back in the day, but balanced with and harmonised by intricate acoustic work. There are close harmonies in the vocals too and I was interested to find out that Matt did all the vocal work himself; the layering is very effective.

A Rising Tide is billed as “a collection of songs inspired by the human condition, the mechanics of the natural world, and the intersection of the two,” and the four songs on it tackle subjects like environmental issues and political propaganda. This is perhaps best showcased by the lead single from the album. Called The Flood, the message behind the song is that reductions in greenhouse gas emissions are needed urgently to avoid the worst impacts of of future sea-level rise and this theme is beautifully picked up on by film-maker Tim Loe who collaborated with them to produce the song's newly released video. See what you think.