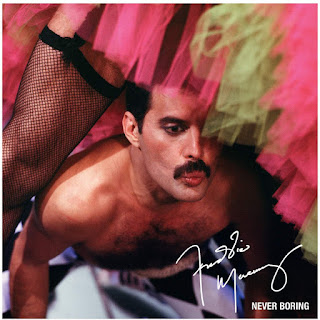 "How Freddie Mercury’s ‘WORST’ song became one of his biggest and most lasting hits." Listen to the newly remastered and re-released Love Kills from the new compilation Never Boring...

When it was initially released in 1984 as Freddie Mercury’s debut solo single, “Love Kills”, a track featured on the soundtrack of music producer Giorgio Moroder’s restored version of the 1927 pioneering silent science fiction film ‘Metropolis’, it provided Freddie with his first solo hit single – reaching No 10 on the UK singles chart.

It also achieved the ignoble distinction of being nominated for a Razzie – Hollywood’s annual pre-Oscars hand out for the worst of the year - The Golden Raspberry Awards.

Freddie featured in a list of five ‘Worst Original Song’ contenders which for the year 1984 also included Prince, David Sembello and Dolly Parton (with 2 nods). In the end “Love Kills” was spared being declared the year’s worst song from a movie: that honour went to Dolly Parton for her song “Drinkenstein” from the film which provided the most unlikely star coupling of the year - pairing her opposite Sylvester Stallone in ‘Rhinestone’. (Stallone scored the film’s second razzie, for worst actor). [yes, we knew you'd want to hear that song too, so it's here - Ed]

Regardless of it’s ignominious start in movie music history, “Love Kills” firmly concreted Freddie’s solo career giving him his first top 10 single, followed by the gloriously retro-campy “The Great Pretender”, the majestic “Barcelona”, “In My Defence” and “Living On My Own” (1993), the latter becoming the biggest selling single of the year in Europe and for which Freddie posthumously received an Ivor Novello Award for International Hit of the Year.

The track is one of 12 featured in a brand new ‘Never Boring’ titled compilation of Freddie’s greatest solo performances contained in the set. Pre-dating Freddie’s first solo album ‘Mr. Bad Guy’, “Love Kills” has emerged as one of his most perennial tracks as both a remix favourite and an enduring disco classic with a life beyond those parameters. While released as a Freddie solo single, “Love Kills” actually features all four Queen band members. Other Queen links to ‘Never Boring’ have Roger Taylor as a backing singer on ‘The Great Pretender”, John Deacon also plays bass on “How Can I Go On” and Brian May contributes guitar to “She Blows Hot and Cold”.

Brian May and Roger Taylor returned to the “Love Kills” track almost 30 years later bringing it back to the light in a stripped down ballad version which debuted on the band’s 2014 Queen Forever album. Their alternative version was performed live with singer Adam Lambert during their 2014 North America tour.

The new “Love Kills” lyric video, according to its creators, drew inspiration from New York’s Studio 54 and early 80’s disco, both of which featured large in Freddie’s life of that period.