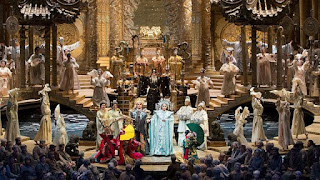 None shall sleep as Daniel White heads back to the cinema for more live Opera. This time it's Puccini's Turandot, streamed live from the Metropolitan Opera in New York...

To my shame I have never seen a Zeffirelli produced Opera before and only came to love and admire his work through his cinematic accomplishments. I, along with everyone else who enjoyed his breathtakingly audacious film making, mourned his passing this year. But had I known just what he had achieved within operatic circles my sadness at his death would have been even greater. Franco Zeffirelli successfully produced a number of operas for the Met Opera House, including Turandot. Anyone that worked with him tells of a man who inspired, who was a visionary and who didn't see the distinction between was achievable on stage as any different to on the big screen. Zeffirelli created opera that defied the confines of the stage and truly brought to life the richness and the beauty of the spectacle that a well produced opera should be. I dedicate this review to the memory of Franco Zeffirelli and for the gift that he has given so many audiences over the years. It is a fitting legacy that his productions are still being stage around the globe.

I have always loved Puccini and the way that his work interweaves fantastic story telling with astonishing operatic vocals and orchestral composition that is befitting of the lavish operatic setting. Watching any opera staged at The Met is an event - the auditorium is one of the best in the world and you know that whatever you have chosen to see will boast some of the finest operatic singers in the world. Turandot demands expert handling and deserves jaw dropping and immersive sets and with a Zeffirelli production it was going to receive exactly that.

Act One opens outside Peking Palace and the first thing that struck me was the sheer scale of the set. In all my years attending theatre I have never seen a set which so realistically conveys the feeling of being outside. The night sky and street design seems to break free of the constraints of the stage and the cast (with a choir of at least 50) gave the illusion of a busy night setting even more credibility. At its best, theatre and indeed opera transports you to another world, a far off distant time and allows you to engage and connect with the events as they occur.

I was relishing the opportunity of hearing Christine Goerke sing the astonishing arias sung by Turandot and she was every inch the Princess that she is required to be. Watching the ice maiden melt and become overwhelmed my emotions as she falls in love with Calàf was simply mesmerising and Goerke proved yet again why she is the sought after Opera star that she is. Calàf is played by Yusif Eyvazov proves that opera is not all about singing as his acting ability is emotively memorable. To convey a man who is willing to risk his own life to win the lady he has fallen for is hard enough but to do so in the light of the peril it places his family in is truly profound. Eleonora Buratto has one of those voices that immediately draws a smile to your face and her portrayal of the doomed Liu is tear jerkingly effective. The principle cast are supported by the legendary Met Opera Choir and they are in fantastic voice for Turandot.

Turandot is the natural home for the now well known aria 'Nessum Dorma' and yet, without hearing the piece in its context, it makes little or no sense. Nessum Dorma, or 'None Shall Sleep' is a powerful tenor aria sung whilst Princess Turandot is desperately trying to discover the name of the man who she is bound to. She vows that 'none shall sleep' till she finds out his name and her terrified subjects cower in an unsleeping nightmare. Ysuf Eyvazov masters the notational range with such power and emotion it really is clear why the aria is the centrepiece for so many concerts.

Turandot is an Opera of three acts and each act has one of the largest set changes I have ever seen during a production. Entire buildings are taken down or put up and, when the curtain raises, the audience can be heard to gasp in astonishment. As much as the on stage talent need applauding so to do the stage management, technicians and stage hands who ensure that Turandot is as smooth as it is excellent.  Turandot is not only a fitting tribute to the masterly skill of Zeffirelli but to The Met Opera House whose reputation for outstandingly epic Operatic events seems to only grow year on year. If watching the live streams in cinemas is this exhilarating I cannot wait to visit The Met for myself!