Review - Rigoletto On The Lake 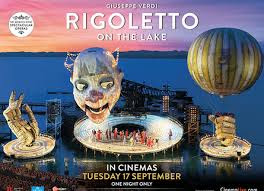 Daniel White headed back to the opera recently, courtesy of his local cinema, and watched Rigoletto On The Lake...

Read Daniel's article about Opera at the Cinema here.

Outdoor staged Opera is an exceptional event but it also raises challenges both in staging and the performance itself. However, Rigoletto on the Lake was more than a staged opera in a Park but a performance that used the lake surroundings itself as part of the performance space. The stage, lit by a setting sun is dominated by a huge clown's head with its hands separated and occupying their own staging areas left and right. As dramatic as the staging is, it is so much more than just mere backdrop. The clown's head or marionette moves and acts as an emotional barometer for what is unravelling during the opera. As Rigoletto's terrible fate becomes clearer so the clowns head turns from figure of fun to a grinning, mocking skeleton. Rigoletto On The Lake forms part of the Bregenz Festival and features orchestral work by the astonishingly impressive Wiener Symphoniker [please stop giggling at Wiener - Ed].

Rigoletto is brought to tragic, almost pitiful life, by Vladimir Stoyanov who portrays him as a court clown, ridiculed and despised by the courtiers. His only source of happiness is with his secret relationship with his daughter, Gilda (Melissa Petit) kept secret and locked away should anyone discover her. Rigoletto serves The Duke (Stephen Costello) who delights in seducing the women of his own court. It is the seduction of Gilda that finally proves to be Rigoletto's undoing and, as events spiral out of control, the curse visited over The Duke rebounds onto Rigoletto himself. It is an opera that is heavy in tone and yet the lake and the staging acts as a kind of light relief to the desperate tone that permeates the entire opera. Verdi's orchestrations are beautiful in both their intensity and subtle moments of tenderness which break through the storm clouds offering scant hope but a little respite from the inevitable tragedy.

The staging and indeed the courtiers themselves are portrayed as a circus the latter being an ensemble of mocking clowns and performing monkeys, acrobats and fire breathers. As if to emphasise the nightmarish otherworldliness of the life Rigoletto has fallen into. The Duke's henchman mock him and Rigoletto as Monkeys trained to obey but without question but ridiculing their amoral master behind his back. The Opera's lighting, deliberately stark and unforgiving, is intended to highlight the 'rock show' elements of the set pieces and yet gives no hiding place for Rigoletto, The Duke and his doomed lover. As with any outside performance, acoustics can be an issue and yet every note and tragic sung syllable is perfectly performed and heard. Although the orchestra is unseen (which is my only complaint about this performance) they still seem connected with the performers on stage and the musical cues are picked up and delivered without any issue at all.

Rigoletto himself is a challenging character to portray. Get the pitching wrong and you end up to deep in twisted inhuman cruelty which makes it impossible for an audience to feel the deep tragedy that is at the heart of the opera. Vladimir Stoyanov portrays Rigoletto as a man corrupted by his own deformity and the hatred and isolation it has inflicted upon him. World weary and exhausted by the demands placed upon by The Duke, it feels like life itself has pushed him into self ridicule as well as belittling others. You find yourself pitying this pathetic figure and feeling that had things been different he would have had a life like anyone else. Even when he decides to take The Duke's life, against the wishes of his own daughter, it still feels like he has been pushed to this decision rather than arrived at it with a free will. Of course, all of this makes the final scenes so much darker as his daughter's life leaves her body.

The iconic final sequences are added an intense poignancy as Gilda's spirit leaves her body and is transported to the after life by hot air balloon, With the skeletal and now eyeless marionette looking on with a mocking and heartless expression. If the marionette is operated by strings then it is Rigoletto that is the sub marionette, seemingly dancing at the whim of his bigger and more powerful master. Taking opera out of the theatres and impressive opera houses is a risky decision but, by placing them in a natural and beautiful setting, this production of Rigoletto achieves an even greater sense of tragedy that hits you with the force of a sledgehammer. It is an experience I will never forget and, after all, isn't that what Opera is all about?