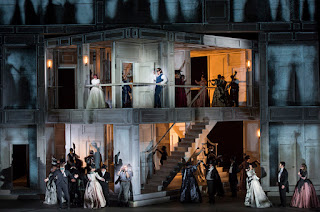 Daniel White heads back to his local cinema for more of the Royal Opera House's Cinema Season, this time it's Don Giovanni ...

Any opera is going to be an event when it is staged at The Royal Opera House, you can pretty much guarantee that the staging will be enchanting, the orchestra at its very best and the vocal performances will be gifted by operatic singers at the very top of their game. Don Giovanni isn't just any old opera though, it's a Mozart classic and this was going to be an astonishing evening. I was already excited before the orchestra had even played a note as I am a huge Mozart fan and a visit to Prague, a couple of years ago, had only increased my love of his work. But more than that, this is the celebrated 2014 Kasper Holten production with additional technological wizardry by Luke Halls and a set by Es Devlin. If you aren't in the know then these names won't mean much to you but you will remember them after experiencing Don Giovanni.

Don Giovanni has always been about the psychological price being paid by a man who is sleeping his way around the world. Giovanni is amoral and doesn't care about the human wreckage he leaves behind him. Yet, despite his play boy exterior, he is not comfortable with where life has led him and even with the choices he has made. Trapped with a lifestyle too long to change but needing more and more to get the kick or satisfaction that he needs. Es Devlin's astounding set really is designed to accentuate and highlight the broken and tortured mind of Don Giovanni. The set is a labyrinth of interlocking rooms, passage ways and staircases that are built on two levels and housed in a large cube. In addition to this the cube is set on a revolve and is constantly in motion throughout the opera, providing an added level of disorientation to the unstable Don Giovanni. 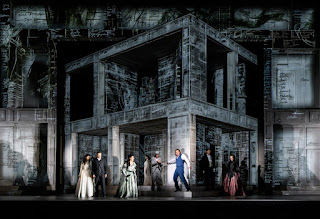 The use of video projection in theatre is not a new innovation and yet, for this production, it is used to such an extent that it almost breaks the boundary between film and theatre. The projection is designed so it covers the whole cube, whether it is facing the audience or not, which provides an incredible fluidity to the set. During the overture the names of ladies that Don Giovanni had relations appear on the doors and the walls and as the opera progresses these names appear in the background. Almost accusatory they provide a visual reminder for the audience of the magnitude of Don Giovanni's sins. Aside from the main cast there are mysterious deathly figures in white, almost statuesque, they are a visual depiction of the destruction that Don Giovanni. Or perhaps he is being haunted by the poor unfortunate souls he has caused to take their own lives as a result of his betrayal.

To portray Don Giovanni isn't just a case of being smooth and philandery, there has to be an element of the erosion of his mind that increases with intensity as the opera progresses. Sudden bursts of violence that are triggered by the murder of Don Pedro, Don Giovanni is now on a trajectory that will pitch him straight into an infernal eternity. Erwin Schrott is mesmerising as Don Giovanni and his vocal talents are as wide ranging as his acting ability. I have previously seen Schrott in The Royal Opera production of Faust (playing Mephistopheles) he reminds me very much of Ramin Karimloo (Phantom of the Opera) with the same intensity and finesse on stage. Malin Bystrom was astonishing as Donna Anna and matches Schrott with intensity and sheer magnetism. The entire cast for Don Giovanni are barely away from the stage and this adds to the sense of claustrophobia with a very large but very closed set. With all this intensity it is easy to forget that Don Giovanni is also very funny and the exchanges between Don Giovanni and his servant Leporello are hilarious. Equally Don Giovanni's acerbic asides when confronted are handled with such comic timing that it temporarily relieves the pressure that is inexorably building up.

This was always going to end badly and as Don Giovanni refuses to repent (to the ghost of the murdered Don Pedro) it almost feels as though he finally realises he needs to pay the price for his lascivious lifestyle. This production is one of the finest I have ever experienced and once again the art deco of The Regent, Christchurch is a perfect venue. When so often cinemas and concert venues are created with such a modern feel they lose all sense of personality and warmth, The Regent is now my favourite cinema/ theatre in the county.