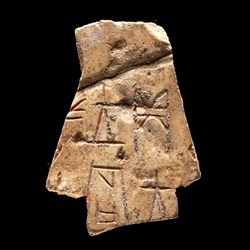 Chinese Oracle Bones – a new display of animal bones once used to explore the unknown, now studied to unlock the mysteries of the past – opens on Friday 25th October at the National Museum of Scotland...

The oracle bones exhibited were used in divination ceremonies over 3000 years ago as an instrument to obtain guidance and divine insight from ancestors and deities. The guidance sought could be related to anything from military strategy to the cause of the King’s toothache.

The bones were prepared by cleaning, carving and drilling them before intense heat was applied until they cracked. These cracks were then read and interpreted by a diviner. The questions asked were often inscribed onto the bones along with the diviner’s interpretations, providing us with valuable insight into the concerns of the time. These inscriptions are examples of the earliest-known Chinese script.

This display will examine these inscriptions and their significance during the late Shang dynasty (c.1200–1050 BC), as well as their continuing importance today.

Dr Qin Cao, Curator of Chinese Collections at National Museums Scotland, said, "We are delighted to share these fascinating objects from our collections. They provide examples of the earliest-known forms of Chinese writing, as well as offering an insight into the beliefs and politics of ancient China. The practice of divination is something that still captures public imagination to this day as evidenced by its prevalence in modern culture, notably in the popular series of Harry Potter.”

The practice of oracle bone divination fell into obscurity with the demise of the Shang dynasty. Over 3000 years later, in the 19th century, the bones were unearthed by farmers. They came to be known as ‘dragon bones’ and were believed to have healing powers, so were ground up and used in medicine.

It was not until the late 1800s that the true nature of the ‘dragon bones’ was recognised. Reportedly Wang Yirong, a prominent scholar of the time, was prescribed medicine containing ‘dragon bones’ when sick with malaria. He was said to have noticed the similarities between the bones’ inscriptions to those on early bronze artefacts. Further research confirmed that the bones were inscribed with the earliest-known form of Chinese writing, the root of Classical Chinese.

The inscriptions remain a source of interest for researchers today. Around 5000 individual characters have been identified to date, but only a third of these have been deciphered so far. Oracle bone inscriptions are key to the study of the Shang dynasty, and objects such as those on display may yet play a part in further uncovering the mysteries of the ancient past.

The bones in National Museums Scotland’s collections were purchased in 1909 from missionaries Samuel Couling and Frank Chalfant. There are over 1700 oracle bones in the collection overall, the second-largest collection outside of East Asia.

The exhibition includes 40 objects that explore the phenomena of oracle bone divination and track the evolution of early forms of Chinese writing to its present-day form, including a Banliang coin dated third century BC.

The display will feature research on the oracle bones divination process from a joint project between National Museums Scotland and the University of Edinburgh. The project examined residue traces and tool marks on the bones and aimed to recreate the conditions that would result in a crack.

The bones are displayed alongside contemporary Chinese objects associated with the divine, such as a bronze tortoise shell and coin set used for fortune telling. Parallels are drawn with popular Western practices, such as tarot card reading, that demonstrate a universal human need to manage the unknown and find meaning in a time of need or uncertainty.