News - Murder in the Cathedral 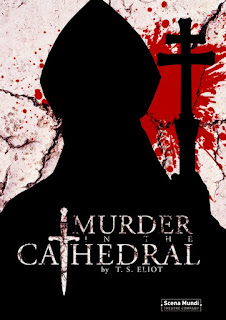 There will be Murder in the Cathedral as T S Eliot's play comes to Southwark, Oxford and Guildford next month, courtesy of Scena Mundi...

Next year marks 850 years since the murder of Thomas Becket in Canterbury Cathedral. To celebrate this anniversary, theatre company Scena Mundi plans an extensive tour of the play in cathedrals in 2019 and 2020, starting off in Southwark on 4th November.

"Thomas Becket preached his final sermon in London at the Priory of St. Mary Overie, now Southwark Cathedral," explained The Very Reverend Andrew Nunn, Dean of Southwark. He continued, "It is therefore deeply appropriate that this new production of Eliot’s Murder in the Cathedral will be performed at Southwark as we begin the marking of the 850th anniversary of the martyrdom of this great saint. We look forward to playing our part in the remembrance of a champion of the English church and people."

Murder in the Cathedral was written by Eliot for the Canterbury Festival in 1935. It retells one of the best known episodes of English history, the murder by four Norman knights of Thomas Becket, Archbishop of Canterbury (1162-1170), former Chancellor of England and friend and companion to King Henry II, on 29 December 1170. Becket’s crime was to renounce the Chancellorship and stand for the power of the church against the king. The violence of the murder, the miracles which began to take place at Canterbury, Thomas’s almost immediate canonisation by the Pope and the transformation of the murder scene of martyrdom to one of Europe’s most visited pilgrim sites make this a gripping and sensational story.

In this new touring production of the play, Jasper Britton is to play Thomas Becket. His career spans theatre, film and television with recent theatre including Witness for the Prosecution at County Hall and Pack of Lies at the Menier Chocolate Factory, playing King Charles in The Libertine at Bath Theatre Royal and taking on various roles for the RSC, including time in New York. On TV his work includes appearing in the prequel to Game of Thrones (HBO).

The rest of the cast includes Rupert Bates, Pip Brignall, Isaac Deayton, Jake Dove, James Keningale, David Keogh and David Shelley. There will also be a chorus of the Women of Canterbury.

The director of both Scena Mundi Theatre Company and the play is Cecilia Dorland. Ms Dorland founded the theatre company in 2013. Since then, much of the company's work has been performed in churches. Since first directing Murder in the Cathedral in 2014, she has dreamed of touring the play to major cathedrals and that dream is now being realised.

The play will be performed at Southwark Cathedral on 4th, 5th, 12th and 13th November; University Church of St. Mary The Virgin in Oxford on 8th and 9th November and in Guildford Cathedral on 14th November. Plans for the tour to 25 venues in 2020 will be announced after the initial season. This production of Murder in the Cathedral is supported by the TS Eliot Foundation and a number of individual donors.

All performances begin at 7.30 pm.

Tickets from £10 (concessions available) Find out more and BOOK TICKETS
Email ThisBlogThis!Share to TwitterShare to Facebook