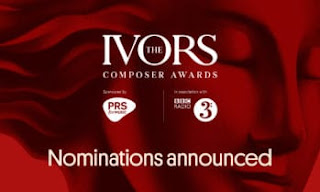 The Ivors Academy have announced the nominations for The Ivors Composer Awards 2019...

The prestigious awards, now in their 17th year and previously called the British Composer Awards, honour the best new works by UK contemporary composers in classical, jazz and sound art. The awards celebrate the art of composition whilst also showcasing creative talent of composers and sound artists.

This year, 33 individual works have been nominated across 11 categories including Orchestral, Solo or Duo, Sound Art, Chamber Ensemble and Amateur or Young Performers.

The nominated categories are judged anonymously, and are voted for and presented by music creators, representing true peer recognition for their craft. Of the 30 composers nominated, Gary Carpenter, Sir James MacMillan and Charlotte Harding, who is a first-time nominee, have all received a double nomination.

The nominated works demonstrate the vibrant and diverse range of music composed in the UK today and composers reflected on a vast array of themes in their music:

Michael J McEvoy’s Mother Medusae responds to the #MeToo movement, gender pay gap and aggressive online trolling, whilst John Pickard’s Mass in Troubled Time unfolds a narrative of a family fleeing war-torn Syria by sea. Emily Peasgood’s Never Again, was commissioned by the Sea Folk Sing Project to commemorate the 100-year anniversary since Armistice Day on 11 November 1918, and explores reconciliation, and how one moves forward after a period of profound loss.

Reflecting on the natural world Martin Green’s Aeons: A Sound Walk for Newcastle is a sound walk designed to be experienced through headphones during a half-hour walk along Hadrian’s Wall Path on the banks of the River Tyne. Whilst Charlotte Bray’s Invisible Cities for viola and piano takes inspiration from Calvino’s book of the same name and reflects on the urban environment.

The Ivors Composer Awards are sponsored by PRS for Music. The event is in association with BBC Radio 3, providing exclusive broadcast coverage.

The Ivors Academy Chair, Crispin Hunt, says: “We’re incredibly excited to honour a wide range of phenomenal talent, all of whom have demonstrated the highest quality of composition craft in their fields, engaging with and challenging the world around them.”

Andrea C. Martin, PRS for Music CEO, commented: “I am delighted that we are once again supporting The Ivors Composer Awards, celebrating the diversity and vibrancy of our contemporary composer community. Congratulations to all those nominated, your works show the range of talent and creativity flourishing in the UK.”

Works eligible for The Ivors Composer Awards 2019 received a UK premiere between 1 April 2018 and 31 March 2019 and must have been composed by a composer born or ordinarily resident in the UK.

Three to five instruments for one player or voice per part

• Leafleoht by James Weeks
• Meeting the Universe Halfway by Matthew Sergeant
• String Quartet No.3 ‘Hana no hanataba’ by Julian Anderson

Six or more instruments or voices written for one player or voice per part, except works written specifically for the voice

A capella or accompanies, except works for choir and orchestra

Including works for choir and orchestra

Works specifically written for the stage, including opera, dance and musical theatre

• Aeons: A Sound Walk for Newcastle by Martin Green
• Aurora by James Hamilton
• Regretfully Yours, Ongoing by Neil Luck

Works for voluntary, amateur or youth choirs, ensembles and orchestras


Celebrating the art of composition and showcasing the creative talent of contemporary composers and sound artists, the winners in each category will be announced at a ceremony at the British Museum in London on Wednesday 4 December 2019. Presented by BBC Radio 3’s Kate Molleson and Tom Service, the ceremony will also include the presentation of an Ivor Novello Award for Innovation and an Ivor Novello Award for Lifetime Achievement, still to be announced, presented in association with the Music Publishers Association.