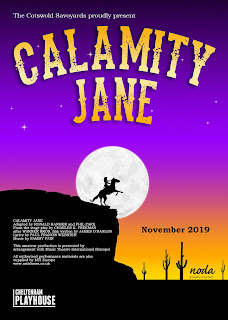 Cheltenham-based amateur theatre company The Cotswold Savoyards present Calamity Jane at the Cheltenham Playhouse next month. Just off the Deadwood stage, director Sheila Ham and Calamity Jane herself, Joy-Amy Wigman told us about the new production...

It’s 1876 in the wild and humorous Old West of Deadwood City, Dakota, home of the sharpshooter Calamity Jane. Calamity can outrun and outshoot any man in Deadwood. Calamity’s best friend is Wild Bill Hickock, a former peacekeeper and she has a soft spot for the handsome Danny Gilmartin, a Lieutenant at the local fort. Back in Deadwood, the citizens are impatiently waiting for the stagecoach to arrive, especially Millie, the owner of Deadwood’s hotel/bar/theatre The Golden Garter. She awaits the arrival of a lovely actress named Frances Fryer, whom she has booked to headline her show...


With tickets for the production selling out quickly, first up in the interview chair is the musical's director Sheila Ham... 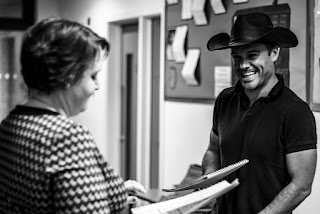 Hi Sheila thanks for taking time out from rehearsals to chat with us. How has it been going?

You have caught me on a good day, last week I was tearing my hair out and this week I was so proud I almost had a little cry.

Calamity Jane is your directing debut, what made you want to move from acting to directing? And how have you felt about being behind the scenes rather than onstage this time?

The directing seed was sown a few years ago when a lovely friend suggested I stop making suggestions and have a go at being in charge. At the end of last year, I had started clearing my commitments in preparation to take on a small directing project, probably with a few friends. It coincided with The Cotswold Savoyards (or Savs) call out for applications to direct my favourite musical Calamity Jane and I just had to take the leap and apply.

Choosing a musical to direct as your first production must be a challenge. How have you prepared for the responsibility?

Getting a team together was the most important. I have had the help and guidance of a mentor Gill Cogzell who is a long-standing member of the society and who has directing a fair share of her own shows. Luckily a close friend Rachel Prudden offered take the role of production secretary which is basically a role where she keeps me in check. And I can’t rate highly enough my Musical Director David Manifold and Choreographer Hatty Davis.

As you are so familiar with Calamity Jane as a musical are you doing anything different with this production or are you staying faithful to the original?

Interestingly, the stage version of Calamity Jane came after the film, the order of the songs is a little different and there are 4 more songs that were cut from the film. I am very keen to keep the same style and feel of the film, I will consider it a job done if the audience leave with a big smile and some of these wonderful songs trapped in their brains.

What did you find most challenging about directing Calamity Jane?

The script is set for a much larger stage so the biggest challenge has been to adapt the staging whilst keeping the story going and the scene changes slick. 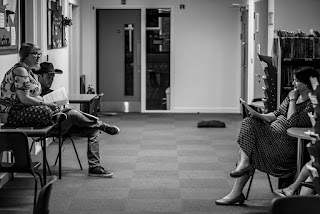 You have been a member of The Cotswolds Savoyards since 2007. Does everyone feel like family now? How have they adjusted to you being “the boss”?

The Savs have always been a wonderful society to be a part of, but its membership is hardly recognisable from 2007. Most of the “old guard” have hung up their show shoes and a wave of younger members have joined; we have nine new members just for Calamity. Luckily the feel of the society is still the same and as a place to make lots of new friends, there is nowhere better.

Every change in command comes with a bit of a learning curve, there are times when I have felt like a big sister left home alone to look after my siblings. In the beginning I found the transition quite difficult, but as rehearsals have gone on and as the cast got into their stride I have found my confidence has grown and as a consequence received stronger support from the cast.

What can audiences expect when they come and see the production? Are there any favourite scenes for you?

Every audience is going to see a delightfully bright, fun, uplifting show. The cast are ridiculously talented and funny, there is a 13-piece orchestra which will blow them away, the choreography is top notch and the set and costumes are rather wonderful.

What would you tell someone who was coming to see a Cotswolds Savoyards production for the first time?

That there is nothing amateur about this production.

Have you got the directing bug now and what are your plans for next projects?

You will have to ask me again in 2 weeks, this week is “get in” at the theatre where we build the set and everything we ordered arrives, including costumes, wigs, banners (the list is never ending) so multiple opportunity for things to go wrong. A friend recently finished his debut directing at the Playhouse and reported that show week was the best week he has ever had, so perhaps next week will be the decider on my directing future.

Finally, these are challenging times with theatre closures and increasing costs. What does theatre mean to you and why is Amateur Dramatics so important?

It is not just theatres that have been suffering, amateur dramatic societies across the UK have been closing their memberships down or like the Savs, have had to learn to adapt. Societies members used to stay loyal to one company, but now most move about the groups following the shows. Back in 2007 the Savs were a primarily producing Gilbert and Sullivan operettas, but as demand waned, they moved their repertoire to include more popular shows and luckily it saved the society.

Personally, I feel that amateur dramatics is a very weird hobby to have, not everyone appreciates that at every non-professional show you see, a cast member has probably paid more to be on that stage than you have to watch it.

Those people on stage and the team behind them are the real theatre lovers. If they are not up there entertaining you, they will be in the audience supporting their friends, pouring the drinks in the bar or perhaps even plotting to direct their next show.


And here is the Q&A with Joy-Amy Wigman, who plays Calamity Jane 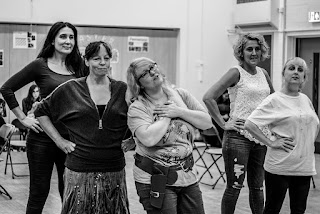 Hi Joy-Amy, thanks for taking time out from rehearsals to chat with us. How has it been going?

Exciting and scary! It’s my first show with this company and they are such a friendly and talented bunch of people.

When people think of Calamity Jane, I’m sure most of them will think of the Doris Day film. How much has the film influenced (or NOT influenced!) your portrayal of the character?

I’ve to do a mix of my own take on the character and the Calamity that you know from the film. People (quite rightly) love Doris Day in the role and I’m sure they will want to see a little of her on stage. But I think our Calamity is little more mischievous.

What was it about Calamity Jane that made you want to audition for the lead role (or were you specifically picked for the part?)

I love the music. Don’t get me wrong, I adore the deep, sad shows like Blood Brothers or Les Mis but sometimes what you need is a big, bright musical that leaves you smiling as you leave the theatre. I auditioned for a few parts in the show, it never really occurred to me that I might actually get the lead!

There is an enduring appeal with Calamity Jane as a musical. Why do you think they have stood the test of time, both as productions to put on and for audiences to watch?

Like I say, it’s a big, bright, cheery hug of a show. There’s something very wholesome. I think it’s lasted so well because it’s one of those shows that the whole family can enjoy together. It’s also funny and sweet and the songs are eminently hummable.

Do you have a favourite song or part of this production of Calamity Jane? Something that you think the audiences will enjoy or that you particularly enjoy performing?

I have two particular favourites which are I Can Do Without You and Windy City. I Can Do Without You is really fun for me because it’s a proper childish argument. Bill and Calamity are pulling each-others pigtails, which makes it so much fun to perform. Especially as Robbie Gardner [who plays Wild Bill Hickock] is always trying to make me laugh.

Windy City is great because I get to play with the ensemble and I adore the choreography. 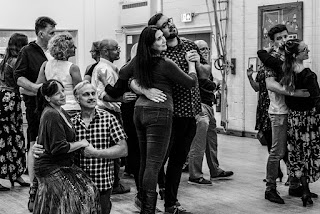 This is obviously not your first time on stage, how did you get involved with theatre, musical theatre and The Cotswold Savoyards in particular, since this is your first production with them?

I actually originally trained to be a professional actress at The London School of Musical Theatre. Unfortunately, complications with my health made a career on stage unviable. I still work as a voice over actor and singer. Amateur dramatics gives me the chance to keep performing on stage but for short periods of time.

I have done shows with many different members of the Savoyards and I couldn’t pass up the chance to do this fabulous show with them.

Being in an amateur theatre company means that you do all of this purely for the love of it. How difficult is it to find time to learn lines and rehearse for a show alongside everything else?

The great thing about doing a show “for the love of it” is you are willing to do everything you can to make time. You learn lines in the car, on your lunch break, while you’re doing housework, walking to town. You just fill every crack of your time with it and hope it goes in! There are a LOT of lines to learn in this show.

And finally, if you got the chance to play any character on stage in any play or musical, what would be your dream role?

If I were 20 years younger, I’d say Veronica in Heathers. The music is awesome and Dead Girl Walking is an absolute storm of a song.

But the ultimate would be Kate Monster in Avenue Q. I’ve played the part before but I would go back in a heartbeat. You can get away with so much more as a puppet than you can as an actress.


Thank you very much to both director Sheila Ham and lead actress Joy-Amy Wigman, for answering all our questions. The Cotswold Savoyards' production of Calamity Jane runs from 5th - 9th November 2019 at The Playhouse Theatre, Cheltenham and you can find out more and book tickets HERE.