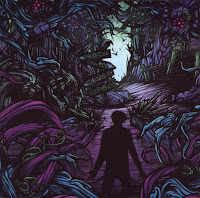 In an effort to further her musical education, Susan Omand has been set "homework" of listening to albums released after the 1980s that she has missed out on. This week does she actually get a day to remember? ...

It’s taken me several listens to decide what my problem is with the album Homesick by A Day to Remember and my conclusion is this: it sounds dated. Now that may be an odd thing to say about an album that is already 10 years old, it came out in 2009, but what I mean is that it sounds like it should have come out 10 years before even that. There’s a lot about it that reminds me of bands like the Chillis (the song I’m Made of Wax... sounds too much like Can’t Stop for me to take it seriously) and Green Day (especially Have Faith in Me which could easily have come from the Dookie album) only it’s not as good here.

It’s not a bad album per se. The cover art by the brilliant Dan Mumford looks fantastic. Some of the song titles are quite fun – like Mr Highway’s Thinking about the End – and I really quite liked the start of the first song on the album The Downfall Of Us All (listen below) because the chant is interesting but then it devolves into the fairly generic Skater/pop punk that was really big in the late 90s and early 00s, just with added shouty bits. It just doesn’t excite me musically, it’s bland, there’s nothing that hadn’t been done before, and better, by other bands and I must admit that I worried that I’d missed something major about it.

So I did a bit of research and, it seems, the novelty about the band is their “innovative” use of metalcore (i.e. the added shouty bits) on top of a pop punk sound. Is that it? Ah. Oh. OK, what about the stories behind some of the fun track titles? One of the most off-the-wall titles "I'm Made of Wax, Larry, What Are You Made Of?" turns out to just be a “cool quote” from the Ben Stiller movie Night at the Museum that the singer Jeremy McKinnon liked. Really? No more deep and meaningful reason than that? Oh well.

And that whole “Is that it? Oh well” feeling continues through the whole album for me, so I think I remain to still be educated about what’s so brilliant about Homesick by A Day to Remember - because I found them very forgettable.