Turn That Noise Down - Aerosmith 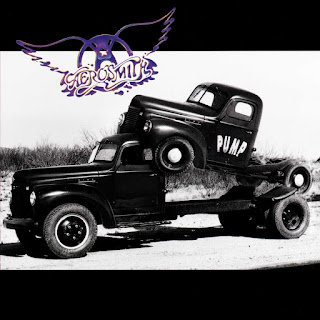 So many well-known albums turn 30 this year and Steve Taylor-Bryant and Susan Omand travel back to 1989 to revisit some of the sounds of their youth that made parents shout "Turn that noise down!" This week, Susan admits to a bit of a thing...

Okay, okay I admit it. I did have a bit of a "thing" for Steven Tyler back in the day and my record collection has a LOT of Aerosmith in it. So when their 10th studio album Pump showed up on our 1989 list it was a bit of a no-brainer for me as it's probably one of my favourites of theirs.

A bombastic start with Young Lust, showcasing Joe Perry's guitar work, and highlighting the raw edge that is a refreshing change from their previous studio album, the much more commercially polished Permanent Vacation, which was good, but polished if you know what I mean. F.I.N.E. (Fucked up, Insecure, Neurotic and Emotional) is next with a much more laid back sound that reminds me of good old fashioned 70's hard rock, Deep Purple style. Then we get what is probably the most famous, certainly the most commercially successful, track on the album with Love in an Elevator. Commerciallity doesn't make it bad though and its slightly trippy middle 8 is really worth listening to on headphones to get the full effect. Monkey on my Back is Aerosmith's catchy anti-drugs anthem with a very hooky chorus and Janie's Got a Gun, one of Aerosmith's most under-rated tracks imho even if David Fincher did direct the music video, rounds out side one with a wonderful wooziness at the start making the harshness of the lyrics all the more shocking.

Side two (yes I have it on vinyl, what of it?) starts with a surprising little bluegrass dulcimer track before it settles back into the rock we know and love with The Other Side which, yes, does sound enough like The Four Tops' Standing in the Shadows of Love to merit the court case that ensued. My Girl is proper peppy rock and roll while Don't Get Mad, Get Even is stunning, sleazy Nola blues. Voodoo Medicine Man (and the preceding "short" Hoodoo) are incredible for the instrumentation, as the guitar and call/response phrasing is very Zeppelin like in places and certainly not the kind of thing you'd expect from an 80s rock band. The album finishes off with the glorious end-of-the-night lighters-in-the-air power ballad What it Takes.

So yes, if you're looking for a stripped back, musically interesting, raw edged album, with a lot of musical influences drawn from American country music over the past 100 years, without much of the stereotypical 80's Aerosmith stadium rock sound, listen to the album Pump from beginning to end. If, on the other hand, you do want the stereotypical 80's Aerosmith stadium rock sound, just watch Love in an Elevator.