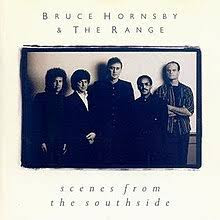 The Show Goes On for Daniel White as childhood memories of the theatre come flooding back with the album Scenes from the Southside by Bruce Hornsby & the Range...

There are songs and albums that soundtrack key moments of our lives. Songs for heartbreak, songs for moments of happiness and songs that we use to strengthen us to keep going. Those songs, those albums, stay with us and as we relisten to them, we are flooded with the memories, feelings and moments that allowed us to become who we are.

I remember the first time I heard Bruce Hornsby and the Range and I remember the first time I ever heard Scenes From The Southside. I want to share with you why this album is so important to me and why, when I listen to it, my heart lifts. I need to take you back in time to a younger me and we need to go backstage at The Royal Theatre, Northampton. Ready? It's time for curtain up! The Show Goes On!

I keyed the security code into the backstage door at The Royal Theatre and stepped through, I was home! It was a cold Saturday in December and the Theatre was a flurry of activity. It was a 2 show day and December meant only one thing. Panto! Stage hands were busy setting the stage for Act 1 Scene 1 (Robin Hood and the Babes In The Wood) and as I walked down the steps at the side of the stage I paused and looked out at the auditorium. Every time I stood on the stage I always stopped and looked at one seat, front row stalls (stage left) always in front of the drum kit. That was my seat and that was where I fell in love with theatre. I was 3 and the panto that year was Dick Whittington, after that I went every year and always sat in the same place. Looking up and smiling at the actors as they took their bows, how could I have possibly known that one day I would be looking down at myself?

A few months earlier I had completed a successful work placement with Theatre In Education and my passion and willingness to mop floors and act as a runner had gifted me more than just a wonderful understanding of how theatre worked. It had given me a place that I could call home, a place where it was OK to be individual and to not fit in. People got so used to me that I could come and go as I pleased and my parents were well used to me slipping off for entire Saturdays, sitting next to the Stage Manager watching the cues being given or in the LX box watching the lighting and sound boards being worked. For some shows the follow spot operator would even let me spot the show while they sat and smiled at me. I had caught the Theatre bug and it was a terminal case. 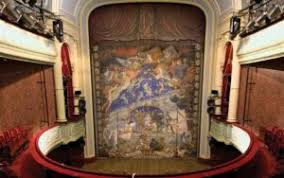 I stepped from the stage and made my way up the aisle to the lighting booth at the back. It was sound check time! The Sound Technician had become a good friend to me and as he slipped a cassette into the machine I accompanied him as he walked from the booth to the auditorium and then to the stage. The opening track (Look Out Any Windows) of Scenes From The Southside stopped me in my tracks "what is that album, it's its amazing!: I asked him. "What? You've never heard of Bruce Hornsby and the Range. You need to listen to this!" I borrowed his copy with a promise to bring it back on Monday and, as I listened to the album again and then again, I was in heaven. Hornsby's voice and astonishing piano playing lifted me to a different realm. At one moment loud assured power chords which would break to some of the most amazing piano solos I had ever heard. If there is an album that musically stands for the state of grace and perfect acceptance that I experienced that first Panto then Scenes From The Southside is it. Here are some stand out moments that are why this album means so much to me.

Look Out Any Window

Sublime synth pad with a soaring guitar solo line opens the album and as the synth builds we hear that stunning piano sustained simple and so, so effective. Then the rest of the band kicks in with a staccato feel and the guitar changes to something more U2 like. Hornsby voice is natural and unforced deeply melodic and his range [pun unintended - Ed] is impressive. As the verse builds to the chorus you realise that the scenes he sings about don't matter in terms of detail - it's the metaphor. Trying, finding out what life is about indeed 'look out any window and see what's going on around you.' That piano solo is why I love Bruce; it's excited and complicated and mixes chords and solo notations. This is the sort of piano style that I enjoy playing myself now. Thanks Mr Hornsby!

A Top 10 Hit in the US (not that I cared about such things) starting with the same sort of spine tingly piano work I now expect from Hornsby and I love the eighties echoey drums and synth bass. Piano trickles throughout this track and I can't focus on anything else. Yet, without The Range accompanying, it somehow wouldn't hit the highs it does. I always enjoy a band that has lead piano and a synth pad wash as background additional. Guitar solo is gorgeous with a slightly distorted sound giving way to more Hornsby tinkling. Then the synth builds back up and vocals resume. There is something about his voice that speaks words of peace to my heart. Kinda like someone singing you to your rest.


I Will Walk With You

A strong man feels weak in the still heat of the day
Nothing is black and white, just a hazy gray
There's a long lonesome sound in the distance calling back to me

This song really spoke to young me, to be honest it still does. The enormity of life and the feeling that we just don't seem to matter can be overwhelming. Yet my place, my walk, matters to me and being enough to take my own steps is what I have to achieve. I matter to me and those that share my journey as I share with them. Kinda musical communion if you like!


The Show Goes On

Wow, this song gets me. Loss and pain and yet we keep going. Hauntingly beautiful piano and an aching vocal line. For me, this is a song that resonated for decades with me and even now I believe in the power of the chorus. It was also used when someone died in Baywatch but tbh I couldn't care who it was - it was always about the song. Even when it was used to soundtrack Backdraft it was the song that made the funeral scene so emotional. Music has a power over me and this album still holds its sway, I challenge anyone to listen to the opening piano and Hammond beginning without tearing up! So many times in my life I have 'seen the lights do a low slow fade' through the tears and pain and I have always had this song's chorus echoing in my mind. This song soundtracks my entire life!

Songs don't just accompany events or even memories. If they are powerful enough, and if you let them in, they become an entity in their own right. I have a sign that hangs over my desk which asks a question. "What Is Life Without Music?" My answer? Empty, devoid of sound and with nothing to reach you when the black dog bites or you find yourself unable to convey in words how you feel.

Thank you Bruce Hornsby for being a constant part of my life and for sharing your melodies with me.