Titter ye much as multi award winning David Benson is to lead an all-star cast in a sparkling new live audio recording of the Frankie Howerd comedy classic, Up Pompeii...

Revisiting the world of Frankie Howerd from his acclaimed one-man stage show, To Be Frank, David Benson will don the toga to play one of Frankie's greatest comedy roles - Lurcio the ancient Roman slave.

Welcome to ancient Rome, where the steps of the Forum are peopled by nubile slave girls and a range of outrageous characters including Lurcios owner, Ludicrus Sextus the Senator, his wife Ammonia, his son Nausius and his daughter, Erotica. Lurcio attempts to deliver his prologue and begin proceedings before hes quickly caught up in the myriad of sexual liaisons in all quarters of his masters house. Why does Ludicrus not leave for the Senate meeting in Rome? Why does his wife return so quickly from the country? Who will take care of the escaped slave girl, Voluptua, and will Nausius' love poetry improve? Whilst growing chaos ensues, an increasing rumbling is heard in the distance – what could that possibly be?

Up Pompeii was a huge TV hit for Frankie, with a loyal following of 12 million viewers. As Lurcio, Frankie constantly broke the fourth wall, taking the audience into his confidence with a non-stop barrage of double entendres and risqué gags, all of which go unheard by the other characters.

Now to mark the 50th anniversary of the first broadcast of Up Pompeii on the BBC's Comedy Playhouse, this new feature-length audio revival by Spiteful Puppet will be recorded at two special public performances at London's Shaw Theatre on Saturday October 12th, and released on CD and download via Amazon, iTunes and spitefulpuppet.com in late November.

Up Pompeii is adapted from the successful spin-off stage play by Miles Tredinnick, and was based on the original characters and BBC TV scripts devised by Talbot Rothwell (a scriptwriter for the Carry On films) and Sid Colin. The audio adaptation was written by Barnaby Eaton-Jones, with Daniel McGachy and Iain McLaughlin; by kind permission of Tessa Le Bars Management.

The new recording features an all-star cast: Frazer Hines (Emmerdale/Dr Who) as Ludicrus Sextus, Cleo Rocos (The Kenny Everett Show/Celebrity Big Brother) as Suspenda, Tim Brooke-Taylor OBE (best known as one third of the TV comedy trio The Goodies and a panelist of I'm Sorry I Haven't a Clue on BBC R4 for 40 years) as Captain Treacherus, Jack Lane (Dads Army Radio Hour/Wisdom of a Fool) as Nausius, Madeline Smith (Hammer Horror star who appeared with Frankie Howerd in the films Up Pompeii and Up the Front) as Ammonia, Camille Coduri (best known for playing Jackie Tyler in Doctor Who from 2005-2010/ Him & Her) as Voluptua, Rosa Coduri (Lucky Man/Jekyll and Hyde) as Erotica, Jilly Breeze (Da Vincis Demons) as Senna, Ben Perkins (Hedda Gabler, 2016) as Corneous and Barnaby Eaton-Jones (Producer/Director, his third revival after BBC Radio 4 Extra's I'm Sorry I'll Read That Again... Again! and Audibles The Goodies) as Kretinus.

Tickets for the performances are available now at £12 or £10 (concession) plus booking fee from www.shaw-theatre.com 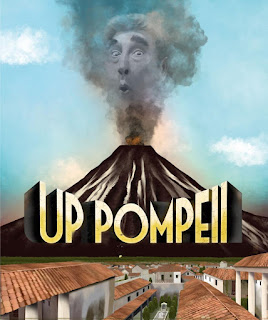 David first became well known for his one-man stage show, Think No Evil of Us: My Life with Kenneth Williams, about the life and career of the late actor, for which he won the Scotsman's Fringe First award in 1996; and for his TV role as Noël Coward in the 1990s BBC comedy series Goodnight Sweetheart. When not touring in the theatre he worked on BBC radio, including playing the character parts in the science fiction comedy series The Scarifyers. He now has a dozen one-man shows in his theatrical repertoire, with which he tours, including Think No Evil Of Us: My Life With Kenneth Williams, Nothing But Pleasure (a.k.a. Mourning Glory), To Be Frank: Frankie Howerd and The Secret of Happiness, Star Struck: A Fantasy Celebrity Party David Benson's Haunted Stage Its A Plot: David Benson's Conspiracy Cabaret, Why Pay More, David Benson's Christmas Party Doctor Whom: My Search for Samuel Johnson, David Benson sings Noel Coward and the two productions which he premiered at Edinburgh in 2010, The Singalong Glee Club and Lockerbie: Unfinished Business. At the National Theatre in One Man, Two Guvnors alongside James Corden, he played the waiter, Gareth, whilst also understudying two of the main parts, including the lead, Charlie. He ultimately appeared in over 1,000 performances at the NT and in the West End. He subsequently starred as Boris Johnson, at a point when Johnson was still London Mayor, in a new one-man satire, Boris: World King. In 2018 and 2019 he co-starred with Jack Lane in a two-hander stage comedy, entitled Dads Army Radio Show, in which the two performers played 25 characters between them, in a staging of three classic Dads Army scripts, based on popular episodes from the BBC TV show written by Jimmy Perry and David Croft, to mark the 50th Anniversary of the show. At this years Edinburgh Fringe, he returned to the one-man show format with a new show called Cato Street 1820 following four years research and study of the Cato Street Conspiracy and discovery of forgotten music in the British Library.