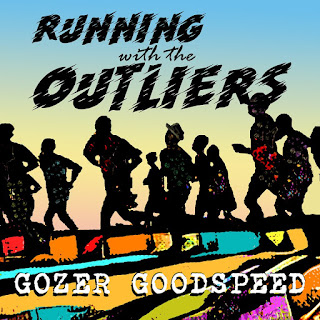 AlbieMedia's favourite folkie Gozer Goodspeed is Running with the Outliers as he announces his debut album...

After releasing three well-received acoustic EPs in as many years (find out more about them here), and after playing hundreds of live dates at all kinds of venues across the South West of the UK, Gozer Goodspeed has announced a brand new seven track album, Running with the Outliers.

Working with prodigiously talented producer Chris Love at the newly-built Whistlewood Studios in Plymouth, Gozer has, for the first time in his career, recruited a full band of talented musicians to record with in the studio, and kept the recording sessions as live and spontaneous as possible. The result is a modern, vibrant indie folk rock album teeming with different moods, different vibes, and unexpected left turns, and packed full of Goodspeed's trademark multi-layered, emotive, often wryly playful lyrics.

Released everywhere on November 15th, Running with the Outliers "will make you redefine what you think you know about Gozer Goodspeed's music" and, ahead of the album release, the title track will be released everywhere as the first single (see the artwork for the single above) on October 4th.

We'll have a full review of both the single and the album coming up but, in the meantime, here's a reminder of a much more laidback sound for Mr Goodspeed and a track from his Barrel Headlong into the Night EP with Far Away, Blissed Out and Free.

Keep up to date with news of Gozer Goodspeed's new releases at https://www.gozergoodspeed.co.uk/running-with-the-outliers