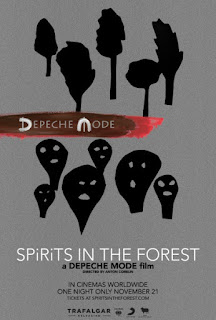 Depeche Mode, along with Trafalgar Releasing, Sony Music Entertainment and BBH Entertainment, have launched the official film trailer for Depeche Mode: SPIRITS in the Forest...

The brand new feature-length film, directed by award-winning filmmaker and long-time artistic collaborator Anton Corbijn, Depeche Mode: SPIRITS in the Forest, delves deeply into the emotional stories of six special Depeche Mode fans from across the globe, giving audiences a unique look into music's incredible power to connect and empower people. Along with these key fan stories, the film integrates performance footage from the two final shows of the band's 2017/2018 Global Spirit Tour, which saw them play to over 3 million fans at 115 performance dates around the world.

SPIRITS in the Forest will be screened in more than 2,400 cinemas around the world on November 21st. Tickets are on-sale from today at spiritsintheforest.com, where fans can find the most up-to-date information regarding participating cinemas and sign up for event alerts.