Feature - The Music of Harry Potter 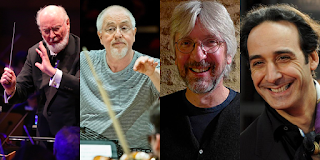 "“Ah, music,” he said, wiping his eyes. “A magic beyond all we do here!”" Daniel White looks at the music of the Harry Potter films...

Even a franchise as fantastically magical as Harry Potter still requires a different type of wand lore to make it truly fly. A wand (or baton) that is to be found in the hands of a musical maestro and not a wizard in training. The music of Harry Potter is as much a part of the series as anything you see on the big screen. From the opening scene at Privet Drive in Philosophers Stone to the closing sequences at Kings Cross train station at the end of Deathly Hallows Part 2, the music of Harry Potter has accentuated every pivotal moment. Whether it's Hedwig's theme, that first glittery Christmas at Hogwarts or the death of Sirius, music has accompanied all of them. The musical journey undertaken by a Harry Potter fan is as long and fascinating as the cinematic work it accompanies. Film music must follow the visual journey and, as Harry's world gets darker, so too does the music. There have been four composers contributing to the the film franchise and we start with the man who soundtracked the first 3 films and whose main theme is a constant throughout the whole set of films.

If there is one film composer who understands the power of music in film and who's back catalogue reads as a testament to his breathtaking ability to create instantly memorable scores then that would be John Williams. Williams created a score that became an instant classic and his use of flurrying strings and climatic brass sectional arrangement is in a magical class on its own. Hedwig's Flight theme captures the discovery of a magical realm Harry didn't even know existed. Whilst the stunning Diagon Alley musical suite captures the excitement and realisation that there is a lot more to this world than what is seen by the Muggles. It is Williams' main Potter theme that is used as leitmotif, not just through his own work but that of subsequent composers and it is darkened and pitched into a minor key as the franchise moves into more evil territory. Personal favourites of mine, other than the big main themes, are Double Trouble (the choral and orchestral piece that is performed at the opening feast for Azkaban) and Duelling the Basilisk (the soaring triumphal Fawkes sequences are simply sensational.) Without Williams' work it is unlikely that the music would have been as memorable and at a time when film music can often be instantly forgettable it is exciting to hear film music that not only does its job but also stands as a creative work of art on its own. Williams themes (Hedwigs Flight and Harry's Wondrous World) are the only two themes that occur in all of the films in the series.

Patrick Doyle (Harry Potter and the Goblet of Fire)

Things get really dark in the fourth film and so does the music. Patrick Doyle's work can be heard accompanying films such as A United Kingdom, Thor and Pride and Prejudice. Continuity is maintained with the return of previous themes but also because Doyle is also conducting the same mighty London Symphony Orchestra (the orchestra perform on all but two of the Harry Potter films, Order of the Phoenix and Half Blood Prince) Stirring strings and brass sections with flurries of woodwind still punctuate his work but there is a darker tone that works perfectly with the return of Voldemort. His strident and percussive work during the Quidditch World Cup is gorgeous and the tragic high strings that play the main Goblet of Fire theme are lent a darker and deathly tone with heartbreaking cello as Cedric Diggory meets his end. The lone French Horn that begins 'Another Year Ends' really works so effectively with Dumbledore's eulogy and terrible warning at the school year draws to a close. Harry's world will never be the same again and neither will the music of Harry Potter.

Nicholas Hooper (Order of the Phoenix and Half Blood Prince)

Nicholas Hooper's more resonantly tense and foreboding composition style perfectly underpins a wizarding world that has erupted into chaos. Hogwarts isn't safe anymore and the music has an uneasy dark tone that will now continue until the franchise is resolved. Order of the Phoenix was Hooper's first film composition work and what a way to start his film tenure! Hooper's work reminds me of Hans Zimmer's in terms of his use of 'attack strings' and a more contemporary feel to his composition. Opting to utilise the considerable talents of the London Chamber Orchestra the result is a lot less grandiose but also a great deal more intimate in feel and sound. Stand out moments are the explosive 'Fireworks', the mysterious 'Room of Requirement' and from Half Blood Prince the tragic 'Dumbledore's Farewell' Big fan of multi layered strings and the low end brooding cello is shiveringly effective. The moment when the entire school raise their wands as a tribute to Dumbledore reduces me to tears every time.

To finish the Franchise the wondrous Mr Desplat gifts us with some truly wonderful musical moments. Starting with 'Obliviate' it really sets the tone for the final film(s) its long drones and percussive thumps yield to fast staccato strings and punctuated by brass pins. As our heroes prepare their final gambit, the music accompanying Hermione wiping of all memory of her from her parents minds is heartbreaking. It's all scurrying strings and brass hits until 'Dobby' then Desplat goes playful and the music goes all skippy. Its one of the scores few light moments as Voldemort finds the Elder Wand and all seems lost. Desplat is a French composer whose work on The Kings Speech, and The Imitation Game brought him to my attention. Never one to shy away from inventive and modern but more than capable of conducting a full symphonic score. Part 2 brings us 'Lilly's Theme' and the devastating 'Snape's Demise' the latter has a wonderful slow and broken echo of Hedwigs theme. When you listen to the difference in mood between Philosophers Stone and Deathly Hallows you really get the idea of how far we have travelled.

Honourable mention must go to Myron Wagtail, lead singer of 'The Weird Sisters' or, as I like to call him, Jarvis Cocker. His astounding performance at the ball during Goblet of Fire was so striking rumour has it he wanted to record a whole album but Rowling turned him down. Spoilsport! Let's 'Do The Hippogriff' you know you want to!