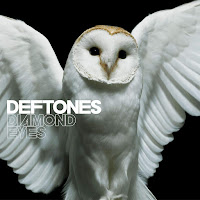 In an effort to further her musical education, Susan Omand has been set "homework" of listening to albums released after the 1980s that she has missed out on. This week she's blindsided by Diamond Eyes ...

As part of last year’s Educating Omand list I reviewed the album White Pony (here) and found it quite enjoyable so it piqued my interest to see another album from the band crop up this time too. Diamond Eyes is a decade on from White Pony too, so I was intrigued to see how, if at all, the band had developed in that time.

The title track is very cool. From the circuitous Floydian start (listening through headphones is a must) the dirty guitars, driving drums and Cure-like vocals are utterly superb.

This continues into track 2, Royal, with the vocal reminding me, oddly, of Comfortably Numb, even though it’s nothing like it. It could very well be the harmonies in the chorus which are so satisfying. I even don’t really mind the screeching in the last half minute although it spoils it a bit.

Track 3 Cmnd/Ctrl is interesting musically with the disconcerting mix of time signatures making me uneasy, in a good way, but the vocals are a bit too shouty.

The repetitive bass at the start of You’ve Seen the Butcher is sublime, leaving you on tenterhooks for what is to follow and that doesn’t disappoint. Again we have complex rhythms and Chino Moreno’s “good” voice is back.

A complete change of pace for Beauty School, and a much cleaner sound all told. It has a crispness to it that is wonderfully at odds with the rest of the album, showcasing everyone in the band, and I adore the contrast of percussion and twangy guitar. Probably my favourite track on the album because of the sharp, Skids-like, sound…

that was until I heard Prince. Ohhhhh.... oh wow, that bassline makes me go all inappropriate. It’s utterly stunning! The discordancy, the feedback noise, the depth and richness, it’s just perfect. Absolute favourite on the album and getting added to future playlists alongside Rx Queen from the White Pony album.

Back to driving drums and dirty guitar for Rocket Skates and a much faster old-skool metal sound, reminiscent of Motorhead until you throw the, now electronically distorted, screaming vocals over it. It could have been so much better without that.

Sextape slows things down again, with excellent guitar work and Moreno’s vocal back to its Cure-like best. There’s a joy in this track that isn’t evident in any of the rest of the album and I put that down to the laidback “beach at sunset” sound.

Back on point with Risk. A chugging bass undercuts the, not too annoying this time, distorted vocal and, again, the percussion is fascinating and gets pulled to the forefront a lot more than in other tracks.

Another change of pace and a 60s hippy sound starts 976-Evil before it darkens down and evils up with the bass. Again another one to listen to on headphones as it travels.

The album rounds out with This Place is Death and the soundscaping in it is very clever, the guitars making a carpet of noise for that interesting voice again.

I’m probably going to be controversial here but I prefer Diamond Eyes as an album to White Pony. The 10 year gap has allowed the band to polish and perfect their sound. In many cases, losing the rawness and experimentation can be bad for a band but I really think it’s helped Deftones to discover and refine their sound. So yes, you can call me educated this time because I’ve listened to the band AGAIN and, the more I hear them, the more I like what I find.