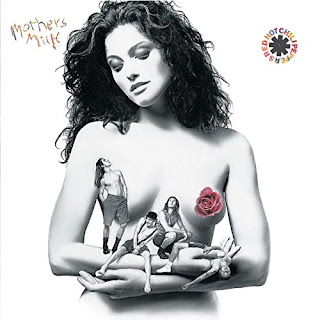 So many well-known albums turn 30 this year and Steve Taylor-Bryant and Susan Omand travel back to 1989 to revisit some of the sounds of their youth that made parents shout "Turn that noise down!" This week, Steve remembers the Chillis album Mothers Milk...

Ah, the start of the Red Hot Chilli Peppers (yes, I’m aware this is album four but nobody had bought the first three) I remember it well. Mainly because all my friends were absolutely raving about Mother’s Milk, apparently it was new and fresh and completely different to anything else, and I completely disagreed. My disagreement is not me stating the album is bad, far from it, there are some fantastic songs that get my body moving, but is it really fresh and new in 1989? We had driving guitars in just about every band around, Level 42 had been pushing a bass guitarist as the star for a while by now, and the Beastie Boys did that rap singing better than Anthony Kiedis, so it’s not fresh and new, it’s stolen and rehashed. However, it’s still great to listen to.

It’s full of the energy you’d expect from a RHCP release and new members John Frusciante on guitar and drummer Chad Smith complement Flea and Kiedis really well. Album opener Good Time Boys is pretty good and the cover of Stevie Wonder’s Higher Ground is great. The brass on Subway to Venus elevates an otherwise standard track, but Magic Johnson sounds like someone trying to force funk into a Beastie Boys belter without permission. Nobody Weird Like Me doesn’t know what it wants to be, but Knock Me Down sounds like a band in tune with themselves and is my favourite non-cover track on the album. Taste the Pain has the potential to be something epic and is a precursor to Red Hot Minute which is by far my favourite RHCP album so I appreciate this track a lot, but for what came later rather than as a standout record on its own right. Stone Cold Bush and Fire are fun interpretations of punkish tunes, Pretty Little Ditty was another that sounds here like an experiment gone awry but I love the fact that the band try something different even if they aren’t ready to yet.

Punk Rock Classic sounds like a heavier band doing a RHCP cover which to be fair freaks me out a little. Sexy Mexican Maid, great little funk rock song, and the very weirdly starting Johnny Kick a Hole in the Sky close out the album strongly. See? I did like most of it but it’s messy and sounds more like rehearsal than a finished product. I understand the affection RHCP fans have for Mothers Milk, it’s where the sound the band would perfect started and has some highlights for sure, it’s just not as experimental as Red Hot Minute, it’s not as polished as Red Hot Minute, but it’s not bad.