Turn That Noise Down - Jethro Tull 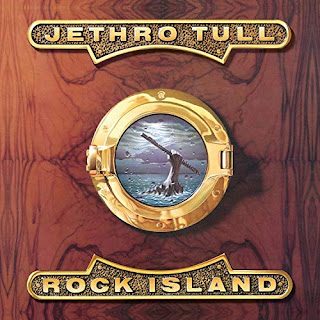 So many well-known albums turn 30 this year and Steve Taylor-Bryant and Susan Omand travel back to 1989 to revisit some of the sounds of their youth that made parents shout "Turn that noise down!" This week, Susan revisits Rock Island...

I bet if you ask most people under 40 about Jethro Tull, you will be met with blank looks. Some know-all swots may come up with the fact that he was an eighteenth century English agricultural pioneer who invented the seed drill [show off - Ed]. Even with those folks over 40, they’ll come up with misty memories of student days listening to vast and rambling prog rock, quoting album names such as Aqualung, Living in the Past and Thick as a Brick and regaling you with stories of gigs where Ian Anderson dressed as a minstrel, stood on one leg and played the flute. Some serious aficionados may even get as far as their folk-rock period in the late 70s of Heavy Horses and Songs from the Wood, but I’m willing to bet that very few, if any, will mention the 1989 album Rock Island. There’s a reason for this.

In about 1987, after a few years’ hiatus, during which Ian Anderson farmed salmon, the Tull returned as a hard rock outfit, with 1989s Rock Island being the third album in this phase. Hard rock. With mandolins and a flute. Yeahhh… no.

OK, not absolutely no. There’s something intriguing about the album as you get generic 80s rock, complete with twangy guitars, thumping basslines and electric drumkits. Plus flute. So The Rattlesnake Trail is Bon Jovi lite. Plus flute. Undressed to Kill could easily be Dire Straits. Plus flute. Ears of Tin is Opus-ish. Plus flute AND mandolin [oooh – Ed]! You get the idea. You can go through the whole of this album trying to guess the 80s rock bands that they sound like, just with added flute. It’s quite a good game. And it’s really a not bad album as long as you don’t think too much about its pedigree because it sure as hell wasn’t the Jethro Tull sound I remembered. Thankfully they got over this commercial rock phase not long after this as their next album, Catfish Rising in 1991, returned to the blues and broadened into world music which suited their flute and mandolin thing a whole lot better.

Oh yes, and I forgot those other essential addition of 80s generic rock songs - suggestive lyrics and silly videos that got banned by the BBC. So... anyone fancy a bit of Kissing Willie?