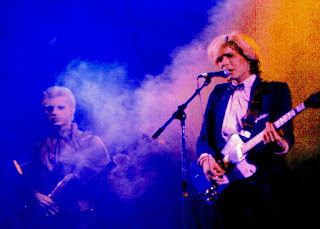 Inspired by our series of articles looking back at music released 30 years ago, Jimmy Hunter takes a step further back in time to give us a Song of the Day 1979. This week, he's big in Japan...

When talking about the "new romantic era" c. 1980 many people include the group we're listening to this week as being part of the movement; followers of the movement. This was vehemently denied (and indeed derided) by lead singer who was very uncomplimentary about the new romantics themselves.

My favourite of this band's output was released in the spring of 1979 so I can gush about it now, without having to wait three years for the 40th anniversary of its commercial success. Yes dear pop fan, this week we're dancing in our kimonos to Life In Tokyo by the very wonderful Japan.

Now those of you who know me will have been tracking my interest in electronics gurus of the '70s (or maybe you haven't) and to know that this record was co-written and produced by Giorgio Moroder will therefore come as no surprise. He was everywhere in 1979 and he waved his magic on this record (you can listen to the full length version here).

However, the real magic is David Sylvian's voice. Tone is unique and you're either born with it or not. It's not a skill that can be learned, however the skill is knowing how to use it. Sylvian's vocal glides through this track effortlessly; like silk wafting on a gentle breeze.

Although the construction of the record and its synthesiser is a Moroder signature, I've always felt that this collaboration is least like a Moroder and A.N.Other work than any of the others. Perhaps that's because of the band itself? I don't know. By the time this single came along the band had been going as Japan for about 5 years or so with its own definite image (and sound) - influenced by Bowie and Bolan.

Like much of Moroder's output the melodies and arrangements rest on a solid chassis of bass line synthesisers and rhythm. This is no different - it has the trademark "disco" instrumental mid section with a crescendo chorus at the end but somehow it all feels a little different. There's no "anthemic" feel to it but believe me, it was bliss to dance to way back then in the discotheque.

It took three goes for this single to become a hit and I'm glad they persisted. Many people seem to prefer Quiet Life or even the dire cover of I Second That Emotion: I never have, it's always been Life In Tokyo! So, let's knock back a cup of saki and indulge, shall we?