SotD79 - Ian Dury and The Blockheads 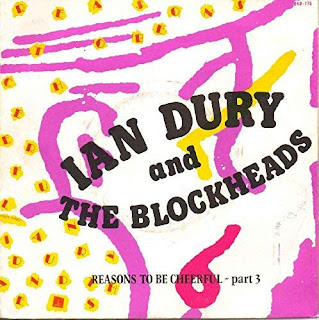 Inspired by our series of articles looking back at music released 30 years ago, Jimmy Hunter takes a step further back in time to give us a Song of the Day 1979. This week, he finds some reasons to be cheerful...

Sometimes the memory of events, places and times can get somewhat distorted and I always had in my head that the record we're listening to this week was a hit in the very early part of 1979. It clearly wasn't. It did, however, despite its success, spend only 8 weeks in the UK singles chart and yet it left a fairly substantial legacy.

This week it's all about being cheerful, dammit!! And given current events, we REALLY need reasons to be cheerful - so let's allow the inimitable Ian Dury and his fabulous Blockheads start us on our way.

Unlike the utter dirge occupying the top 3 slots in this week's 1979 singles chart, this rather delightfully lengthy offering from the Stiff stables was quite a breath of fresh air (listen to the full length audio version here). I've long been a fan of Chaz Jankel's writing and I'd really enjoyed the music that ID&TB had given us thus far. This single, however, is not what appears first on the list when you search the band's music.

It's a single I love, though, always have and that's why I bought it. Right from the drums and cowbell intro with the hooky almost bass line chant of "reasons to be cheerful, part 3" fading in then into the vocal, its arrangement is good, very good. It has a markedly different sound to previous works with a much more jazz/funk/soul influence to it. It was the last record to be released by the band in its original lineup.

However. If you "Wikipedia" (yes, I'm using it as a verb so don't @ me, I know!!) the group you'll find some inaccuracies and some glaring omissions: the Live Stiffs Tour mentioned on this page does not mention Lene Lovich being part of that tour. She was. She was also a major Stiff artist and her omission is inexcusable.