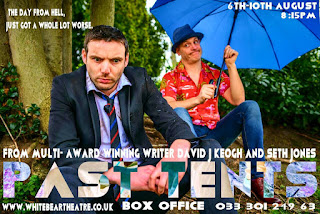 Daniel White watched Past Tents, a new play by David J Keogh and Seth Jones, on now at The White Bear Theatre, Kennington...

Alan, the unluckiest of the unlucky, is having a day that would destroy the hopes of the biggest optimist. After finding out his four year old child is not his, Alan hits the road only to crash in the middle of nowhere. He is forced to stay in a local campsite- where he meets his nightmare of a neighbour for the night. Justin. Justin has lived on the campsite for nine years with his "family". The pair continuously clash in beliefs, character and visions of life - but will the fresh perspective given to each other, help them? Or just set them up for disaster.

Anyone that knows me will have realised by now that I love theatre, all genres, all sizes. Pub Theatre is a fantastic way for writers to develop their work for stage and for audiences to widen their experience of Theatre from just being about the big shows. Fair disclosure, this isn't just a review, it is an impassioned plea for people to support the arts. If you only ever darken a theatre doors to see David Tennant 'Tennanting' or Ian Mckellen 'Gandolfing' then you are playing it safe. More than that, you are actually not helping new and innovative writers to find their playing space and their audience. If you are lucky enough to live in and around London you really have no excuse as the Capital is blessed with pub theatre venues that can deliver. Get out of your comfort and go and see something by someone you haven't heard of and starring people you know nothing about. Do it! Do it now!

Why not start by booking tickets for 'Past Tents' a brand new play by award winning writers David Keogh and Seth Jones. I mention award winning, because these guys aren't fresh out of college and inexperienced, they know what makes a great story and how to completely draw an audience in. Mr Keogh isn't young in fact he is very old (as old as I am) [surely not THAT old - Ed]. This isn't a dig at Mr Keogh's years, quite the contrary, when he writes about pain, about loss and about gut wrenching heart ache you get the impression that he has lived. That's important!

"Every play has to start somewhere, so Fringe Theatre is hugely important. It also gives actors and directors a chance to hone their skills. Fringe is where the acorns of great plays are sown. Supporting a play like ours is so helpful" - David Keogh (Past Tents Writer)

I was invited to watch the dress rehearsal of the play, ahead of tonight's (Tuesday 6th August) opening night. The theatre is upstairs in the beautiful pub, The White Bear, and it's worth turning up early to enjoy the atmosphere and perhaps even a pre show meal. That is the beauty of pub theatre, the venue is as much a part of the experience as the play itself. Pub theatre makes theatre going more accessible to a wider audience and isn't only for the posh and moneyed elite. But then theatre never was intended to be elitist was it? Shakespeare wrote for the common man and yet it has been turned into something the rich use to show off their 'class and style' at. Pub theatre is very much a relaxing change from this needless common man shunnery.

'Past Tents' is a three man play which focuses on the unlikely relationship between Alan (Seth Jones) and Justin (David Keogh) at a campsite that has seen better days (possibly) and its manager (Virgil) who definitely has never seen a good day in his life. More on Virgil (Mark Keegan) later but "ewwwwww." No spoilers here in regards to plot but this is so much more than an anarchic comedy, think The Odd Couple meets British Inception on a campsite.

"Past Tents is a play about two lost souls, completely opposite, forced together, unable to escape. They are both trying to come to terms with the worlds which are falling apart. They reluctantly find each other and, maybe amongst all the bickering, they might just be able to help each other. Either that or kill each other in the process" - Tallulah Sheffield (Director Past Tents)

Throwing two mismatched and opposite facing characters 'into the mix' together is not a new concept and yet there is a fresh zingyness about 'Past Tents'. From the moment the play begins you completely buy into the ebullience of Keogh's Justin. This effectively contrasts with the 'Eyoreness' of Jones' Alan. These are two people who shouldn't ever share a pint. much less a campsite with each other. Whilst you can completely understand why Alan is so negative, his attempts to bring everyone else crashing down with him would be a test of even the most blindly positive. 'Past Tents' has moments of extreme awkwardness as entirely different world views crash with the ferocity of two asteroids colliding. Yet, there is something vulnerable and hurting about Alan that made me incredibly sympathetic to him. How many times do we use aggression towards others to hide our inner pain and loss?

'Past Tents' offers more than a simply camp based farce and its depth and darkness are hinted at from the start but really come to the fore in the final act. Writers Keogh and Jones, have a lot to say about "where we are" and how our actions effect and impact others. This deep seriousness could threaten to derail the play and render it overly preachy were it not for the tension relieving of Virgil. If there were ever a man who should not be allowed out in public this is he. Running a campsite with his deeply concerning 'interests' would put even the most dedicated of camping enthusiasts off. Virgil lives in his own world and seems completely oblivious of what is going on around him. There is a surreal disconnect with the characters that is more than difference of opinion. It's like they keep sort of 'missing' each other. This is deliberate and, when the final scene is played out,  audiences have that wonderful moment of connecting the dots and picking up on the subtle hints that run throughout the play.

Past Tent's is directed with considerable talent by Tallulah Sheffield who allows the actors the space they need to develop whilst not allowing the pacing to suffer. The sparse and minimalistic staging is effective in that it allows focus to be on the characters stories without distracting with unnecessary effects. Sheffield is going to be a Director that will be one to watch and I, for one, relish the opportunity to enjoy more of her work. There must be a considerable temptation to over Direct, especially in Fringe Theatre, and always to the detriment of the play. Sheffield effectively pulls together the characters brought to life by Keogh, Jones and Keegan without muting them. Special mention to Rob Nicholas who delivers a lighting and audio element that does not over balance but perfectly frames the play. Especially effective in a key stage change over which provides essential context for the audience whilst distracting from the actor led scenery shift.

'Past Tents' is a play that deserves to tour nationwide, it is accessible but leaves you with something to discuss over a drink. It is easy to see why Keogh and Jones are award winning writers and their work demands a wider audience. An absolutely stunning piece of theatre. Go and see it!

'Past Tents' runs at The White Bear, Kennington. From Tuesday 6th August until Saturday 10th August Book your tickets here