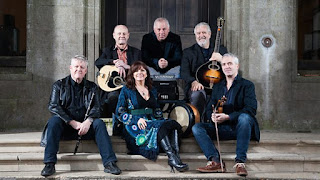 The nominees for the BBC Radio 2 Folk Awards 2019 have been announced...

Now in its 20th year, this year’s ceremony, presented by Radio 2's Mark Radcliffe, will take place at the Bridgewater Hall, Manchester on Wednesday 16th October 2019 as part of the Manchester Folk Festival.

Mark Radcliffe says: “I'm really chuffed to be hosting the Radio 2 Folk Awards on home turf in Manchester this year. It's also great to be part of the Manchester Folk Festival which seems to be going from strength to strength. I can promise you that there will be excitement aplenty on the night plus the very best live music from artists established and emerging on the healthier than ever British folk scene.”

A highlight of the folk music calendar, the Radio 2 Folk Awards celebrates the UK’s thriving folk music scene and serves to raise the profile of this much loved musical genre. The event showcases and celebrates the best folk, roots and acoustic music and features live performances by the very best acts. The evening will welcome an array of special guests as well as performances from new and established artists including legendary Irish group Dervish, Welsh-Senegalese duo Catrin Finch and Seckou Keita and Edward II, Anglo-Caribbean fusioneers from Manchester.

Dervish will also receive a Lifetime Achievement Award at the ceremony. The band have been bringing Irish traditional music to the world for 30 years, and have played at festivals across the globe - from Rock In Rio to Glastonbury. The band features some of Ireland’s finest traditional musicians, and is fronted by one of the country’s best known singers, Cathy Jordan.

Shane Mitchell from Dervish says: “We are thrilled and so delighted to be receiving this very special honour at the BBC Radio 2 Folk Awards, particularly as this is the 30th anniversary of the band.”

Dervish are celebrating their anniversary with an album called The Great Irish Songbook, which features performances by a remarkable array of guest vocalists. The album will premiere with a special concert involving Imelda May, David Gray, Kate Rusby and actor Brendan Gleeson at the London Palladium on Thursday 19th September.


The nominees for the BBC Radio 2 Folk Awards 2019 are as follows:

This year, the award for Best Album will be chosen by Radio 2 listeners. Voting is now open via bbc.co.uk/radio2 and closes on Friday 9th August 2019 at midnight. Jo Whiley will play a track from all four nominated albums between Monday 5 August and Thursday 8 August on her Radio 2 show (7pm-9pm).
Email ThisBlogThis!Share to TwitterShare to Facebook