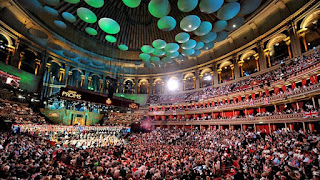 The BBC Proms season starts on Friday so our resident Prom Queen, Susan Omand, gives you her top five Proms concerts that she’s looking forward to...

Where has the year gone? It doesn’t seem like that long ago that I was doing my Today at the Proms articles for last year’s list. Never fear though, I’ll be doing the same this year, with a short article every day looking at what’s coming (Prom-ing? - Ed) up on TV and Radio for that day, discussing the works and picking excerpts for you to listen to – partly to prove that classical music doesn’t need to be scary and inaccessible but mostly just because I enjoy the music and want to share it with you.

And there’s much to enjoy this year, especially for the purists. Looking through the list, there seems to be somewhat fewer of the “not classical” Proms that seem to have over-populated the Programme over recent years which, for me, is a good thing. In my opinion, there’s plenty of opportunity for pop music to get live outings and shown on TV with all the great summer festivals but the Proms (and the annual Vienna concert) seem to be the only time classical music gets a look in on the mainstream TV scheduling. Anyway, the upshot of this is there is more classical music to enjoy. YAY! I’m really looking forward to their composer-themed Proms this year, which, as the name suggests, concentrates on the work of a particular composer, like Wagner and Bach, rather than presenting a mixed programme. I also want to listen to their film music proms; yes, I count film music as Prom-worthy because some of the orchestral arrangements are stunning. The main thing that excites me this year though is the number of works and composers that I don’t recognise! It’s going to be a real voyage of discovery for me and I’m willing to bet that my Top 5 at the end of the Proms season may well be quite different to this one.

For now though, in date order and not counting the first and last nights, here’s my five personal favourite Proms I’m looking forward to this year (synopses and listings from the Proms programme, I’ll discuss them in more detail in my Today at the Proms articles on the relevant day).


Prom 8: Invitation to the Dance - Dance – whether in the insistent Russian folk rhythms of Stravinsky’s Firebird suite, the exotic pulse of Bartók’s Dance Suite, or the languorous, sensual stretches of Debussy’s faun – runs right through this concert featuring three orchestral classics.

Pyotr Ilyich Tchaikovsky - Symphony No 6 in B minor, 'Pathétique'(51 mins)


Prom 26: Mozart's Requiem - Turbulent shifts of mood run through both Brahms’s Tragic Overture and the Prelude and Liebestod from Wagner’s opera Tristan and Isolde. Mozart’s Requiem – the composer’s final work, left unfinished at his early death – completes the programme.

Errollyn Wallen - This Frame Is Part of the Painting(10 mins)BBC commission: world premiere


Prom 51: The Magic Flute - Mozart’s final opera is a beguiling mixture of enchantment and Enlightenment politics, its score overflowing with melody. Glyndebourne’s new production of The Magic Flute comes to the Proms in a concert staging conducted by Ryan Wigglesworth.


And with that last one in mind, here's the wonderful Caroline Wettergreen, who will be performing at that prom, singing my favourite Queen of the Night aria. See you on Friday for DAY 1!