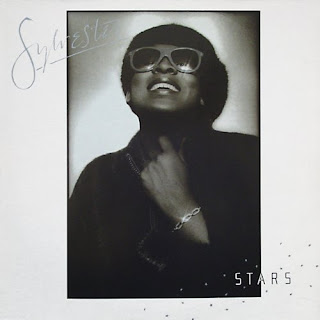 Inspired by our series of articles looking back at music released 30 years ago, Jimmy Hunter takes a step further back in time to give us a Song of the Day 1979. This week, he's seeing STARS...

This particular review has taken me longer than normal to piece together and that's partly due to where this record sits in my memory and for the reasons associated. I remember exactly where and when I bought this record: a record shop in an ugly concrete shopping centre in Plymouth whilst on holiday to Polperro, July 1979. In vivid pink vinyl! There's not much video related information around related specifically to the track I want to share this week and much of what you read here is from memory. So, good luck with that, dear reader.

This week, I'm listening to STARS by Sylvester. And it's a record I love. From the long intro of the full 12" version to the thump of a drum and into the main track, this record just takes me on an airborne trip through my own silent disco and into many glorious memories. Sylvester's vocals: strong, soaring yet never screaming (well, not on this track) with almost a glittery feel to them. What's it about? Us. Each one of us - it's a celebration off the "you". And it's an archetypal '70s disco classic form the stables of San Francisco.

The bass line is not complicated but has an infectious hook that starts in the intro. The synthesisers and the electronics pulsate and twist all the way through, but in particular in the long instrumental section are, to me, instantly recognisable. Patrick Cowley. I always viewed Cowley as a peer of Vangelis and Giorgio Moroder, I've mentioned this before. They share similar sounds and techniques and I've always loved that about them and on this record, penned by Cowley, the structure he gives it and the noise with which he fills the structure is almost like an electronic signature.

Cowley had appeared on all of Sylvester's records up to this point, albeit on keyboards only and it was the start of an all to brief partnership: Cowley died of AIDS in November 1982, Sylvester less than 6 years later. How would the dance music of the early - mid '80s have differed had Cowley not died? We'll never know but when you look at his back catalogue you'll get some idea of where he was travelling. And Sylvester? A hero of mine - one who never compromised because of his sexuality and made his performance, his voice and his creativity as visible as his outrageousness. And also, of course, his courage. Yes, a hero.

You can listen STARS in all its full length HD audio glory below.