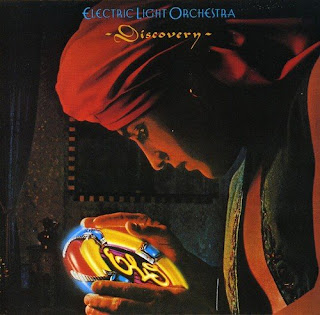 Inspired by our series of articles looking back at music released 30 years ago, Jimmy Hunter takes a step further back in time to give us a Song of the Day 1979. This week, he sneaks a look at the Diary of Horace Wimp ...

One of the abiding memories I have from the summer of 1979 is the music of ELO - the album Discovery, in fact. In early June while I was on a school cruise (the SS Uganda) to some Baltic countries, Shine A Little Love was riding high in the charts all over Europe and it was heard everywhere. It's a great single (and a good solid album too). However, during our yearly trek to Cornwall, I bought the follow up to that and I'm talking about it this week - The Diary of Horace Wimp.

Yes I'm being serious, because this is a solid composition, it has the Jeff Lynne "big sound" and strings and an amusing, caring little story. I'm not being patronising - it's genuinely a good single. Aficionados will probably say that the singles either side of this one were stronger (Don't Bring Me Down followed this up in September) and though I love them both, this single is too oft forgotten about and or derided. Undeservedly.

Right from the jaunty strings at the start, the vocoder in the background as Jeff sings the lyrics and into the big chorus, it fills me with joy. The first time I heard this I just knew that it had to have a happy ending, otherwise you'd hop into a bath and pop open an artery whilst it was playing in the background. No, this isn't just a feel good song - it's not a moralising song either, it's a song that describes the mundaneness of life and how we can at least try to overcome it. How does it do that? Well, it sends a wall of sound at us through the speakers and many will turn from it, shrieking, while I bask in its warmth.

ELO's seven years or so in the limelight were well spent. They'd already honed their sound by 1975 and had a few single releases and they began to attract more attention. This was primarily due to Lynne and his "vision": his determination to produce the music that pleased him and to do this he learned to play a few instruments. By 1979, in my eyes, they were definitely at their peak. If you think about it, this record needed confidence - in its construction, its musicality and its production - and Lynne had all of that nailed.

So dear reader, I entice you to sit with me on a warm summer afternoon (you may have to concentrate on that one!!), watch the official video and feel the warmth of all that confidence flow through you. It's a happy song so let its happiness make you feel good ...