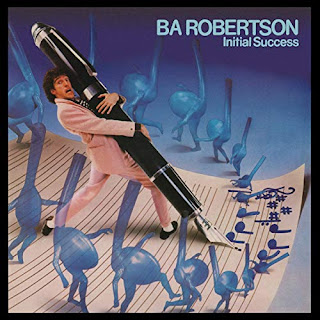 Inspired by our series of articles looking back at music released 30 years ago, Jimmy Hunter takes a step further back in time to give us a Song of the Day 1979. This week, he takes a shot at Bang Bang...

There are several records around at this time in 1979 I might be expected to include here (and three times that amount I definitely would not be) and this week's choice amused me at the time and still does. This week, oh '70s fan, we're listening to Bang Bang by B.A. Roberston.

Who?? You may well ask. As an artiste he didn't seem to take up too much of our time yet he was a successful, multi award winning writer and broadcaster for more than 20 years. He co-wrote the award winning Mike & The Mechanics single "Living Years" with Mike Rutherford and duetted with the superbly talented Maggie Bell on an early 80's ditty which did well commercially and critically.

Both Bang Bang and its follow up, Knocked It Off, had clear narratives and this single lampoons both historic and fictional characters and couples in love with some truly delightful lyrics ...

And all this rich and amusing prose was set to a genuinely, genuinely catchy tune. A very hooky bass line with some squeaky electronics and somewhat dramatically punctuated by the timpani - in itself a hook. You may question this but remember that we were listening to this on short wave radio. Only on Sunday nights for the chart show were our favourite chart records played in glorious FM stereo and they sounded very different.

Roberston always reminds me of Richard Jobson - tall, skinny, curly haired and Scottish. And both with an air of roguish yet harmless menace. A one hit wonder? Not really, he was unlucky not to reach the top spot in the charts and this single sold very well. However, because of the nature of the line (pun intended) "Sherlock Holmes alone preferred a little toke of love", in some BBC broadcasts the lyric was changed to "token love". Bless.

Have a listen to what was and still is, a prime example of a good, solid pop song in this TOTP performance from August 1979.