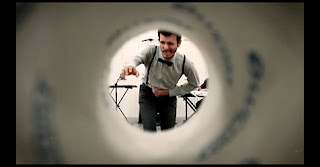 We're huge fans of those theremin-meisters Decostruttori Postmodernisti here on AlbieMedia, and have mentioned them several times before, so we got a bit excited when a new music mash up video appeared over the weekend. Or should we say 00-ver the weekend...

The new film in the 007 saga, number 25 to be precise, will be directed by Cary Joji Fukunaga and will see Daniel Craig as James Bond for the last time. Many wonder who will be in charge of the soundtrack: Ed Sheeran, Lady Gaga, Dua Lipa, David Arnold ...?

Decostruttori Postmodernisti were intrigued by the rumours that "in the next James Bond film, 007 will be a woman", [you can read Alwyn Ash's article on that here] and let themselves be inspired by the "rosa confetto (the candy pink)" and a very particular version of the famous musical theme came out of it.