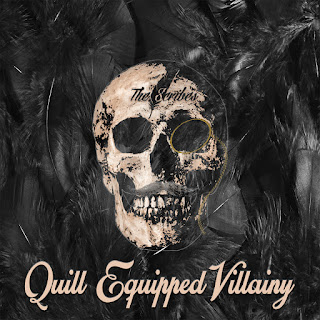 Susan Omand sharpens her writing instrument and listens to Quill Equipped Villainy by The Scribes...

Way back in March, we featured a track called Righteous from an unknown (to me) band from Bristol called The Scribes. Then, they described themselves as "a multi award winning hip hop three piece whose unique blend of beatboxing, off the cuff freestyling and genre-spanning music has … appeal ranging far beyond traditional hip hop fare" and, from that description and listening that one track, they captured my interest. So I was pleased recently to hear them announcing that an album featuring the track has now been released. It’s called Quill Equipped Villainy and features guest artists like Bodega Brovaz, Turemendous and Blacksmith on some of the tracks, so I gave it a whirl to do a track by track of all thirteen songs, just to see if they really lived up to their own hype.

The first song, Don’t You, started and, I’ll be honest, on my first listen I thought the recording was corrupted as it was all jumpy and jangly. However, it’s meant to sound like this and it’s really is an interesting noise, once I realised it was deliberate, which ensured I paid attention to the rest of the song. An intricate rap is layered over this jangle with a brilliant vocal melody hook that took me back to the days of disco and a drum/bass backline that had my head nodding along before it was done.

Now that I was used to the unusual starts to the songs, the second song Get Down, didn’t throw me quite as much with its distorted start and I got into it a lot quicker. The ambience of the music on this one is brilliant, although something near the start sounds like a cat miaowing and that stressed me a bit. Again, there’s a real 70s New York vibe here with James Brown references and soulful brass.

That soulful feel continues to start track three, Righteous, which is the first single from the album. This was the song that brought the band to my attention back in March, featuring the impressive voice talents of Leon Rhymes and they play off each other’s banter really well.

Block War has to be my favourite track on the album. Slower and less musically cluttered than the previous songs, there’s a wooziness to the variable time signatures, with a dark insistence to the guitar and I love the brass hits that balance with it. The best way for me to describe it is - imagine an Edward Hopper painting, this is the music to that. Stunning.


A Motown vibe pervades song five, Priceless, and the falsetto voice, which could be very annoying, actually works incredibly well. For some reason this song reminds me of Ceelo Green too (this is a good thing by the way) and I've been allowed to share Priceless with you at the bottom of the article so you can hear what I mean. 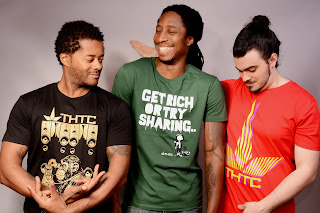 The wandering synth keyboard in Punch Drunk is utterly marvellous and the syncopated snare throws my mental metronome in all sorts of fun ways. I also really like the bar ambience and you could imagine the band playing in the corner.

Any band that sings about Gin is a good start for us here at AlbieMedia and Green Gin is a very clever track indeed. Having the chorus as a scratchy sample of the 1948 original jazz track of the same name by Ernie Andrews is inspired, setting the musical motif and it is counterpointed wonderfully by the darkness of the rest of the song on addiction. And the addition of the Dave Allen clip at the end is genius.

Day in Chicago Cypher is short and sweet, crowd-sample heavy and with a very Starsky and Hutch twangy guitar on repetitive riff which drives the track along.

I get a much more laid-back feel to Brave New World, even though it has a busy brush drum and frenetic sounding vocal and I love the quote from the film version of Aldous Huxley’s book at the end.

We’re back to the Motown sound as the next song, Adrenaline, has great close harmony in its backing. It’s also a brave choice to use an acoustic/Spanish sounding guitar as the main melody carrier as it could have got lost under the vocal layering and brassy stabs but it really didn’t.

Bad Meaning Good is likely a slow burn. The percussion is sharp but the repetitive bloated bass annoys me this time, where the wooziness worked for Block War it’s irritating for me here and, musically, it didn’t evolve in the same way as other tracks but I’m probably missing something.

Get Live is the penultimate track on the album and the brass, as always, is superb for adding a brightness. The distortion and announcement style insertions add extra interest and the beat is very cool.

Vice Grip is a great ending to the album, by turns hypnotic and startling. The lull of the low, almost chant-like chorus backed by synth is cut across by the incisive vocal and jangly guitar of the verses and that note bend at the end is just sublime and rounds it off perfectly.

I realise that I haven’t said much about the lyrics for any of the tracks above and there is a reason for that. To be honest, I would love to read a lyric sheet to fully appreciate them properly because I got so caught up in the music, the mesmerising beat, the overall brilliant sound of most of the tracks on the album, that I know I’ve missed a lot and will continue to do so, no matter how often I listen. When I did remember to actually listen to the words, which are definitely clearly and deftly presented - it was me getting distracted that meant I tended to miss them, they are highly intelligent; full of pop culture references, funny in places, dark in others and always sharply observed.

All in all then, a brilliant album which, yes, lives up to the hype. It showcases the diversity of The Scribes music and their musicality and I was nodding along to every track, totally immersed in the creativity. Listening to Quill Equipped Villainy has also encouraged me to seek out their previous work to see how their style has grown and I want to know what will come next, where they will go from here, because I get the feeling that this album will be their breakthrough into the bigger leagues. So if, like me, The Scribes are a new band to you, I would say this is the perfect time to get on board with listening to them because they’re going to be big once Quill Equipped Villainy gets airplay.