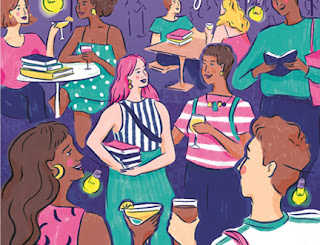 Organisers of the Edinburgh International Book Festival have revealed the line-up for their free late-evening, live-literature strand Unbound...


Music is at the heart of Unbound with Edinburgh Gin, and the series has always revelled in the richness of the Scottish independent music scene. This year Armellodie Records introduce Dan Lyth and Euphrates, The Scottish Enlightenment and Thirty Pounds of Bone who’ll perform alongside three of the world’s best short story writers: Nicole Flattery, Wendy Erskine and Kevin Barry. Night School Records will warm an August night with a journey to where love and romance collide, with music and readings from J. McFarlane's Reality Guest, Michael Amherst and Sean Nicholas Savage. Neu Reekie will explore the astonishing archipelago of Indonesia, spilling out of the Spiegeltent in their usual rambunctious style, offering a rare opportunity to experience some incredible international artists and, inspired by Will Ashon’s astonishing book on the hip-hop legends Wu Tang Clan, Vic Galloway presents a night with Joseph Malik, Callum Easter, Saskia Vogel and Dean Atta.

Roland Gulliver, Associate Director of the Edinburgh International Book Festival, said “Unbound has grown and flourished over the last decade, responding to the Book Festival in the Gardens and listening to the beat of the cultural world outside. There’s been dancing and joy, emotion and intimacy, spectacle and the odd heckle over the ten years, and the 2019 programme promises more of the same. We’ve captured the best of what Scotland has to offer while welcoming a host of international stars to light up the nights and with Edinburgh Gin on board, together with the addition of their festival bar, this year will be one to remember.”

Hip-hop and spoken word once again enliven the Book Festival and the brilliance of Babble On (a strand of the best spoken word artists that runs throughout the Book Festival programmed in partnership with Luke Wright and Becky Fincham) brings one of Britain’s best poets Inua Ellams to stage his RAP Party, a night of hip-hop, dancing and poetry in a collaboration with the Edinburgh International Festival; the irrepressible Bang Said the Gun!, celebrating 20 years, noises up a Saturday night and Ted Hughes Award-winner Hollie McNish will, with some talented friends, give an intimate and memorable performance of words and music. The Fun Lovin’ Crime Writers return home after another incredible year, the mud of Glastonbury fresh on their boots and their literary day jobs an even hazier memory and Edinburgh’s own Flint & Pitch close the Festival with a very special evening beneath the Festival Fireworks.

As part of Faber 90 celebrations artist Richard King celebrates landscape and music from post-war art to the 80s rave scene culture with members of the Scottish Chamber Orchestra. Aidan O’Rourke and James Robertson’s 365 is a very special project which has brought together many voices and musicians over the last year to record all 365 stories and pieces of music. They invite a few of those who joined them on the journey for a night of celebration, stories and song.

Unbound with Edinburgh Gin looks beyond Scotland’s borders to welcome international artists and authors including Zimbabwe’s Tsitsi Dangarembga and Donna Ogunnaike from Nigeria who will be participating in the Festival’s Outriders Africa project. Scotland goes Basque offers the unique poetry spectacle that is Bertsolaritza - audience participation guaranteed! Efe Paul-Azino, director of the Lagos International Poetry Festival, hosts Finding Home, a series of poems and conversations on migration and nationality with a multinational line-up from Iran, Canada and Nigeria.

Neil Boyd, UK Managing Director at Ian Macleod Distillers, brand owner of Edinburgh Gin said, “Edinburgh Gin is thrilled to toast the next stage of our partnership with The Edinburgh International Book Festival. The Unbound programme celebrates stories, music and vibrancy with a twist of Scotland - this resonates with Edinburgh Gin, it’s the perfect fit. We will be at the ready to keep everyone refreshed with our range of gins at our festival bar.”


Unbound with Edinburgh Gin takes place over 16 nights from Sunday 11th to Monday 26th August in the Spiegeltent in Charlotte Square Gardens.

The full programme for Unbound with Edinburgh Gin can be found through Unbound’s official media partner, The Skinny at https://www.theskinny.co.uk/festivals/edinburgh-festivals/books/unbound or at www.edbookfest.co.uk.
Email ThisBlogThis!Share to TwitterShare to Facebook