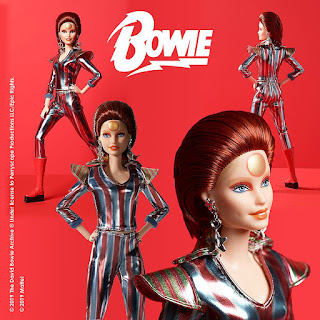 Yesterday, to coincide with the 50th anniversary of the David Bowie single Space Oddity, toy makers Mattel announced their own tribute...

No this isn't a joke and that photo isn't a clever mock up, there really is a Bowie based Barbie doll being released.

With a career spanning over five decades, David Bowie was at the vanguard of contemporary culture as a musician, artist, and icon. Now, Barbie® Signature applauds his global and multigenerational impact with the Barbie® David Bowie Doll!

As a Gold Label™ doll, this will only be produced in limited quantities, and comes with a doll stand and Certificate of Authenticity. It's a definitive celebration of two pop culture icons, as Barbie® honors the pioneer of sound and vision, English singer, songwriter, and actor, whose dramatic musical transformations continue to influence and inspire.

The doll will arrive (not from Mars, just from our warehouse!) in specially-designed packaging, displaying a collage of images from Bowie's early career. It's another respectful aspect of this tribute to a musical genius who redefined rock and roll. It also makes Barbie® David Bowie Doll the ultimate collector’s item for Bowie and Barbie® fans alike.

Bowie was, and continues to be, a unique presence in contemporary culture. Honor his extraordinary talent and undeniable influence by adding Barbie® David Bowie Doll to your collection today!

Um... yeah, ok. It only seems to be available in the US just now though (priced at $50) so, for the rest of the world, today also sees Parlophone release a very special double 7” single of SPACE ODDITY featuring brand new mixes by Tony Visconti as well as a single track available on digital download.

The SPACE ODDITY 50th anniversary double 7” set will come in a box including a double-sided poster featuring an original Space Oddity print advertisement and a Ray Stevenson shot of David taken on stage at the ‘Save Rave ‘69’ concert at the London Palladium on 30th November, 1969, the backdrop featuring a N.A.S.A. astronaut. The set also includes an information card and a print featuring an alternative shot by Jojanneke Claassen from the Space Oddity promo single cover session.

First released as a 7-inch single on 11 July 1969, Space Oddity was also the opening track of his second studio album, David Bowie. Initially inspired by Stanley Kubrick's film 2001: A Space Odyssey, the song gained huge popularity when it was adopted as the unofficial theme of the Apollo 11 Moon landing mission which launched five days after the single’s release. 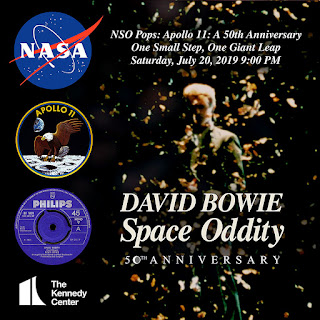 Talking of which, a brand new video for the single will be premiered at a NASA event at The Kennedy Center in Washington on 20th July. The premiere will commemorate 50 years since Apollo 11 landed on the Moon, as well as the 50th anniversary of Space Oddity’s original release.

The event will be Hosted by Mythbusters's Adam Savage and will feature appearances by Pharrell Williams, Mark Armstrong, son of the late Neil Armstrong and astronauts on the International Space Station will see the premiere of a new work by Oscar-winning composer Michael Giacchino (Up, The Incredibles, Mission Impossible, Star Wars; Rogue One).

The video features footage of David Bowie performing Space Oddity at his 50th birthday concert at Madison Square Garden in 1997 (directed by Tim Pope), married to footage shot and directed by Eduaord Lock (the founder and choreographer of the Montreal dance troupe La La La Human Steps), for the onscreen back drop of Bowie’s 1990 Sound & Vision tour.

The 1990 footage was projected on to the large screens throughout the Sound & Vision tour, featuring David effectively performing Space Oddity with himself, a performance replicated at his 50th Birthday Concert. The audio that accompanies the video is the new 2019 mix of Space Oddity by long-time Bowie producer Tony Visconti.

The video will debut at National Symphony Orchestra Pops Apollo 11: A Fiftieth Anniversary—One Small Step, One Giant Leap on 20th July and will be streamed on YouTube shortly after the show has finished.

In the meantime, here's a reminder of the original: