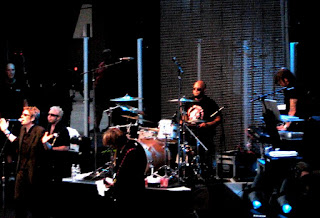 The as-of-yet-untitled studio album is being recorded in the USA and produced by former Love Spit Love member and current Guns ‘n’ Roses guitarist Richard Fortus. Following speculation about new material, the album is slated for release in Q1 2020, creating one of the longest gaps between studio releases for a contemporary act.

Since their debut in 1979, The Psychedelic Furs carved their niche within the emergent punk scene, became a pioneering band in the early days of MTV and have had a slew of hits with ‘Love My Way’, ‘Pretty In Pink’, ‘Heaven’, ‘The Ghost In You’, and ‘Heartbreak Beat’ across 7 studio albums and a myriad of compilations and soundtracks.

The Psychedelic Furs went on an extended hiatus after their seventh studio album - 1991’s World Outside - with co-founders Richard and Tim going on to form Love Spit Love. After almost a decade apart, the Furs reignited in 2000 and have kept their following engaged with a busy touring schedule worldwide and a reissue of their entire back catalogue on vinyl in 2018.

Recently, they’ve been building momentum through shows at the Hollywood Bowl, Meltdown Festival and sharing a bill with Nick Cave at All Points East and the Killers at Benicassim and the Ottawa Bluesfest. The appearance of ‘The Ghost in You’ on Netflix’s Stranger Things and ‘Love My Way’ in the Academy Award winning film Call Me By Your Name has exposed a new generation of fans to the band and their music - with their top tracks now boasting over 150m streams between them.

The band are currently headlining a North American tour with James and have their own UK/EU dates coming in October, including a show at London’s prestigious Roundhouse.

Landing The Psychedelic Furs represents a coup for the label, whose MD Rob Collins has long wanted to work with the pioneering act. Signing for the world, they join a diverse roster which over the past year has seen a host of fresh signings, such as Rumer and Swim Deep, join classic acts such as Billy Bragg and The Prodigy.

The Psychedelic Furs’ manager, Rob Dillman said “We are thrilled to be working with Martin, Rob, Howie and the entire gang at Cooking Vinyl. The Furs had been contemplating doing new songs for quite some time. The enthusiasm and passion the label has shown for the band and the project made it an easy call...we are very excited to be doing this together.”

MD of Cooking Vinyl, Rob Collins, added “It’s been a long-term ambition of mine to work with The Psychedelic Furs, as they’ve made some of my all-time favourite records. That means it’s a particularly personal project for Cooking Vinyl, and makes a unique addition to our roster following a very active period of signings.”

So, while we wait for the new music, here's a reminder of, probably, their most commercial success to date...