It's Moon Day over on The DreamCage today so Susan Omand has a quick look at how the moon has been depicted in art through the ages...

Ever since the dawn of time, the human race has cast their eyes to the skies and painted what they’ve seen there. The picture above is part of the earliest known artistic depictions of the moon, found in the caves as Lascaux in France and believed to date back 15,000 years! It is also believed to be the first lunar calendar in existence because the paintings show the moon in various phases.

Fast forward a few thousand years and many ancient civilisations worshipped the moon, creating temples and statues for their moon gods and goddesses and often depicted the moon as a person on their decorated pottery and mosaics. Indeed, the Greek philosopher Anaxagoras, who lived in the 5th Century BCE, was branded a heretic and exiled for calling out the moon as being a reflective rock in the sky rather than a deity[1]. It is not until the proliferation of monotheism (belief in a single god) that the moon returned to being just the moon in paintings – an object.

Which leads us nicely onto the second painting, one of Michelangelo’s stunning frescos created in 1511 on the ceiling of the Sistine Chapel. 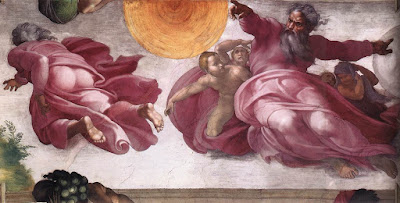 This shows the creation of the sun and the moon in accordance with the book of Genesis and you can just see the moon on the right, under the hand of God, as a chilly looking silvery disc. I must admit it always makes me smile when I see it because I wonder if this is where the term “to moon someone” came from since the rear end of the creator there as he heads from the heavens to create the earth is very well defined!

Moving away from the ecclesiastical and classical, I wanted to feature a painting by “the king of skies,” JMW Turner. 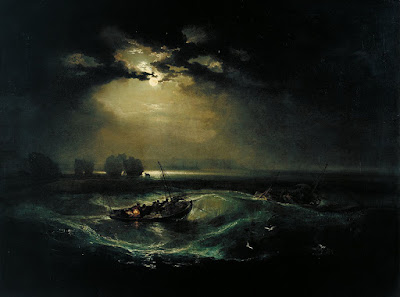 This painting is called Fishermen at Sea and was the first of Turner’s oil paintings to be shown at the Royal Academy in London in 1796. What I like about this one is that is actually shows the moon in context in the sky, a bright focal point of calm in an otherwise tumultuous image.

This is in stark contrast to the stylised beauty of this next painting, created in 1856 by the Japanese artist Hiroshige. 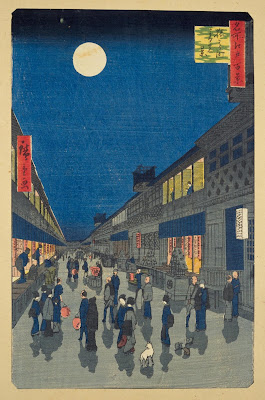 Technically I guess it’s really a woodcut print rather than a painting, but I wanted to include it as an example of how the Far East also depicted the moon in much of their artwork and Hiroshige was particularly prolific, creating more than 5,000 woodblocks in his creative life, several of which feature the moon, and two of which were actually copied and altered by one Vincent Van Gogh in his Japonaise phase. Talking of whom… 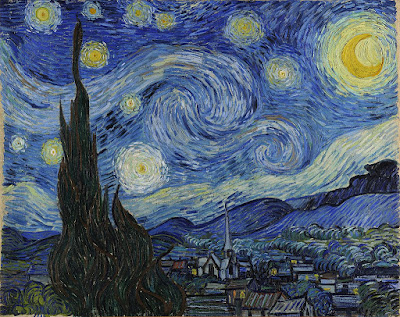 The Starry Night, painted by Van Gogh in 1889, has got to be one of the most widely recognised paintings of the night sky in existence. In it, stars and planets (the brightest star near the horizon is Venus) swirl in a sky dominated by a bright yellow crescent moon. The other very dominant feature in the painting is the dark Cypress tree on the left, often symbolising death.

And, strangely, death is what I think of when I look at this next artwork, although it’s not meant to be about that at all. 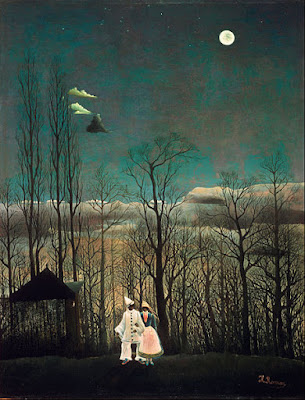 Painted in 1886 by Henry Rousseau, I think it’s the bare branched trees that give Carnival Evening a certain haunted appeal for me, especially since a lot of Rousseau’s other work is very leafy and jungle-like (think Where The Wild Things Are and you have the idea). I also really like the emptiness of the sky, allowing the moon to dominate, even though it is quite small in the painting, with the majority of the detail concentrated into the lower half.

That composition contrasts well with this next work, which also has tall trees, by Edvard Munch. 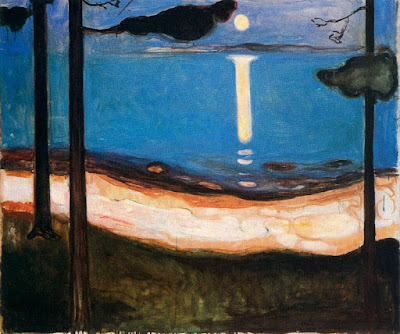 Yes, he of The Scream, but he did many other paintings too, they just seem to get ignored. There’s a lot to like about this painting, called Moon Light, painted in 1895, not least that stunning drippy-ness of reflection of the moon on the water. I also find the patchy texture of the sand enthralling and that touch of red in the foliage/cloud? just above the moon is that pulls the whole painting together. We’re delving a lot more into the world of abstraction rather than realism now but bear with me because this next artist is a new one on me, whose work I only discovered quite recently, and I just love it. 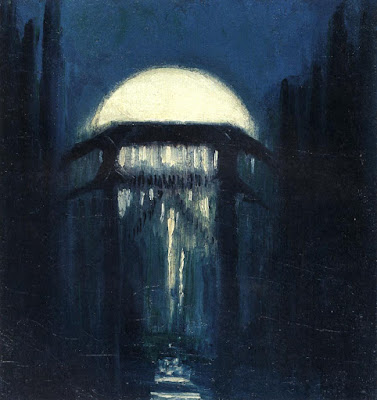 Called Night (Etude) this was painted in 1904/5 by a Lithuanian artist called Mikalojus Konstantinas Ciurlionis [2], who seems to have been a polymath as far as his creativity went, with music, literature and photography also featuring in his vast portfolio. However, this painting fascinates me as the moon seems somehow captured and held by something malevolent, but it still has a flowing Art Nouveau feel to the structure. In contrast to the monochrome, icy but flowing image above we drop right into the abstract now with the warmth of Paul Klee. 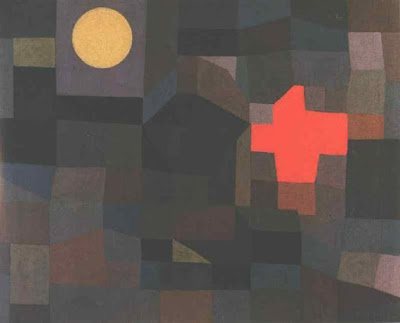 The title, Fire at Full Moon, tells you everything you need to know about this painting as your mind works out how to make sense of the shapes and colours purely because it has that hook to hold on to. For me, I see a farm with a farmhouse, outbuildings and fields in the moonlight and a big fire, like burning the stubble before ploughing it under, but that’s me.

Anyway, that’s the merest tip of the iceberg of the moon in art. From cave painting to abstract expressionism and all around the world, that great grey lump of rock in the sky is set to conti...

That’s only NINE paintings, you say? Why, yes, so it is. That’s because I’ve saved the absolute epitome of lunar related art until last because you needed to take the artistic journey through all the other styles and schools before you were ready to appreciate the true magnitude of the most reviewed artwork in the history of history itself, that seminal design by the artist Antonia Neshev… I give you… THREE WOLF MOON (if you know, you know). 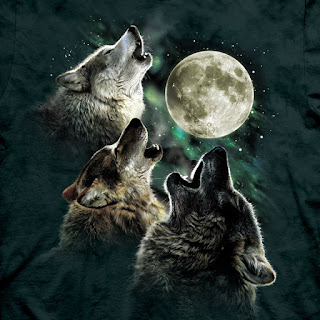