Moon Day - Dark Side of the Moon 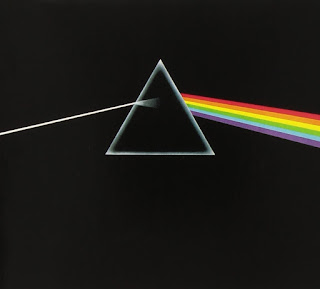 As we're celebrating all things Moon over on The DreamCage, there's only really one album we could feature for our contribution. Here's a reminder of Susan Omand's thoughts...

When I was in 5th year in school, in 1984/85, there were four albums you had to own in order to be “in” with the cool/weird kids... and I got one wrong. I was fine with Marillion’s Script for a Jester’s Tear, really got into Rush 2112 (“first side only, mind, second side is rubbish” to quote cool/weird ringleader) and Led Zeppelin IV is a sublime album from beginning to end. But the fourth one? The fourth one was to be an album from Pink Floyd and it SHOULD have been Wish You Were Here to join the gang but... I just didn’t connect with it. It didn’t really do anything for me. So I picked Dark Side of the Moon and was ostracised from then on. Did I care? Well, a bit, as I’d just spent 3 months’ pocket money on albums, but I still stand by my assertion that Dark Side is the best Pink Floyd album. Why? Let’s grab a large drink and do a track by track, although there really are only two as each side (yes, I only have it on vinyl, what of it?) is a continuous piece of music.

Speak To Me – What an intro to an album! 30 seconds of heartbeat that then builds into clashing hammers, cash registers, voices, manic laughter, helicopters, screaming madness, seamlessly dropping into the bass guitar riff for

Breathe – This is gorgeous. Roger Waters’ bass keeps a constant rhythm as Gilmour’s guitar sings over the top until the lyrics themselves get underway. Add in the ever-present overblown keyboards needed for every prog rock album and this song just lends itself to you settling into it.

On the Run – from the sublime to... the airport. With tannoy announcements undercutting the swirling Hammond organ type engine noise that moves from side to side in your head – did I mention you HAVE to listen to this through headphones for full effect – this builds all sorts of Vietnam War style tension for me that ends in an atomic bomb of an explosive fire above which you can hear...

Time (Breathe Reprise) – Clocks? Yes, ticking, chiming, alarm bells that drop into a ticking drum beat and Roger Waters singular bass notes take centre stage as a xylophone picks up the light melody over tuned drums until the lyrics kick in. “The time is gone, the song is over, thought I'd something more to say.” There is one more thing to say about this though, the guitar solo from Gilmour, is stunning as is the minor key that it ends on before the piano that leads back into the guitar riff from Breathe again and the soaring vocals of Clare Torry that signal the start of

The Great Gig in the Sky – Wow she can hold a note. Her voice over the piano, with the bass guitar picking up the counterpoint to her vocalised (no lyrics) melody adds real depth to the harmonics. But I’m getting all technical and stuff. It’s time to refill the glass and turn over the album.

Money – Cash registers. Well, what else would you start a song entitled Money with? Just before it runs the risk of heading into “Ground floor perfumery, Stationery and leather goods, Wigs and haberdashery, Kitchenware and food, Going up!”, Waters’ bass thrums into being and takes us back into the psychedelic with the added reverb twang of single notes from Gilmour’s lead guitar as the words start. Oh and that saxophone, played by Dick Parry, I would say is the third best sax solo in the last 50 years of pop music. I adore the kick up in tempo in the bridge too, with an almost jazz/blues feel to the backline as Gilmour’s guitar does his thing. And the way the fade at the end throws you as people start talking over the heavenly Hammond organ at the start of

Us and Them – This track makes me cry, every single time, and I have no idea why. Maybe it’s the second best saxophone solo in the last 50 years of pop music. Maybe it’s like “hitting the wall” (pun not intended) with 10 miles to go in a marathon and emotional exhaustion has set in by this point, I don’t know. Such a simple melody, wonderful chord progression, the keyboards, the sax – it just does it for me and then it leads straight into the instrumentation sensation that is

Any Colour You Like – there’s really not a lot I can say about this, it defies description and yet really is colourful. You just need to let the layer upon rich velvet layer of lead, bass and keyboard noise seep into your soul and let it lead to

Brain Damage – the song that the title came from, “I’ll see you on the Dark Side of the Moon.” You’ll notice that I haven’t said very much about the lyrics themselves in the album so far. To be honest, apart from this one song, I don't really listen to the lyrics of Pink Floyd, the voices are just another instrument in the tapestry, to mix a metaphor, but this song is different. The lyrics in this song speak to me on all sorts of levels – it’s my what if song... the breakdown I’ve not yet had, the freedom I’ll never feel, the silent voices screaming in my head – this song is the me I could have been and could still be and it scares and comforts me in equal measure before finally we get to

Eclipse – the soaring organ, the voices, the simple song that finishes off the album as a voice intones a phrase over the same heartbeat drum that started side one “There is no dark side of the moon really. Matter of fact it's all dark.”

Having listened to it all again, I’m all wrung out and over-emotional as always. This is not an album you can have on in the background, this demands full attention and concentration, with headphones, otherwise you miss the full psychotropic experience of it. This is visceral and, yes for me, visual, as it paints the same pictures of the same places in my head every time, so much so it almost feels like going home. No, it’s not the drink talking, it’s one of the four albums you need to have in your record collection.