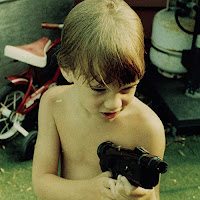 In an effort to further her musical education, Susan Omand has been set "homework" of listening to albums released after the 1980s that she has missed out on. This week she finds Friends and Nervous Breakdowns...

Ah, you thought I’d forgotten about this didn’t you? I could claim lack of time, due to all the Edinburgh Film Festival shenanigans over the past month, but that’s not the real reason that this Educating Omand article has taken so long. To be honest, I just got kind of stuck.

You see, the first time I listened to this album, I hated it. I was tired, I was busy, I was irritable and I put it on to listen to while I did something else and it was just noise. I realised, though, that it was likely me and not the record that was at fault, so I switched it off and decided to sit down once I was in a better frame of mind and just listen to it.

The second time I listened to this album, I got on better with it. The short instrumental intro is great. A low Gregorian chant overlaid with warning sirens that devolves into something akin to the Knight Rider theme and sets the tone for the rest of the album, which turns out to be rap. Of a sort. It’s difficult to explain as there’s a lot going on in each track musically apart from the rap vocals. There’s samples, orchestral sounds, ambient noises, scratches, brilliant acoustic guitar on Girl, Your Baby’s Worm Food. The piano on Blueprint is chillingly disquieting and then… well, then I got bored with the effort and wandered off to do something else.

The third time AND the fourth it was the same. I got about half way through and got fed up of trying and just tuned out. Stopped listening. So I tried to fathom out why. Musically it is indeed busy but that’s, I think, part of the problem. For me, the music doesn’t work as the backing to a rap. There is a lot going on but, rather than being a soundscape of contrasts and landmarks which engage and pull you on, acting as a counterpoint to the words which should be front and centre, it’s all a bit of a muddy melange of the type that I find needs to wash over the senses as a whole to be effective. Sometimes this kind of thing works really well – I mean I love The Orb and it’s that same kind of ambient sample wash effect that I get with this. However, that ambience means that I’m not really listening to the rap, the words of which devolve into a somewhat “Charlie Brown’s teacher” kind of mwah mwah voice so I’ve lost any of the poetry that I usually love rap for. It also doesn’t help that his voice grates on me a bit too, but that is a personal thing.

Anyway, now, it’s getting to the stage that I’m developing some kind of a mental block about the album and am banging my head against a musical wall (and not in a fun way) every time I try it so, to be able to move on with the rest of the Educating Omand syllabus for this year, I need to draw a line under this one and say that I’m not educated this time because I can’t find a way in. I promise I will try to do a “resit” of Weerd Science at the end of the term though because I don’t feel that I’ve been objectively fair to it.