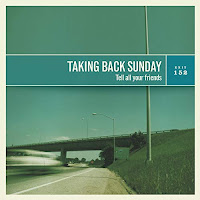 In an effort to further her musical education, Susan Omand has been set "homework" of listening to albums released after the 1980s that she has missed out on. This week she's Taking Back Sunday...

Tell all your friends… unless that friend recommended Taking Back Sunday’s album of that name to you.

Yep, I think Mr Ames is going to stop talking to me soon. Y’see he is a major fan of Tell All Your Friends (as evidenced here) so I wasn’t really surprised when it pitched up as one of my #EducatingOmand Year 2 homework albums. I had been looking forward to this, as I do with all my “new to me” albums but this one in particular given the hype I was getting from him about it, as one that will be challenging and musically stimulating, so I eagerly settled to listen. And the verdict is…

It’s ok. I didn’t hate it. But, for me, it’s nothing special. It’s half an hour of neo-emo-pop wailing over some not bad guitarwork and a drummer that’s going to be peching [Tartan translation : panting, tired out, sweating, exhausted – Ed] by the end of the album. Several of the songs have interesting introductions, the piano intro on The Blue Channel is particularly impressive, and there’s the expected anthemic “lighters in the air” sing along choruses to a lot of the songs that would probably be great with a crowd of mates at a live music festival somewhere but the album as a whole just didn’t tick my boxes as the epic must-listen that it was built up to be. However, this did make me wonder why I didn’t connect with it even slightly, especially if it’s a favourite of my Year 2 tutor, someone whose opinion I value in many esoteric areas. So, I had a think about it and thoroughly depressed myself with my conclusions.

I think it’s because I’m that year or two [try 16 years – Ed] older than Mr Ames that there’s nothing really in these songs that I haven’t heard before, elsewhere, back in the days when I was at the age he would have been when he first heard this. I get the feeling that “time and place” nostalgia may have a lot to do with his love of Taking Back Sunday and Tell All Your Friends; where I had 1980s Marillion songs to build a special place in my heart for when I was 16, he had this. With that in mind I went back and listened to the album again and it all clicked into place. I could picture this being the album on in the background at late night “deep and meaningful chat” parties, or on in the car on a mega roadtrip to go somewhere (or nowhere) special, as an album you bury yourself in when getting over the first big breakup or as songs on the radio while getting ready to out with pals. It certainly sounds like the kind of album you would hang a lot of high school memories from.

So, yes, you can count me as educated this time, inasmuch as I realise I’m the wrong audience for Taking Back Sunday because I’m 35 years too old to be 16 and hearing Tell All Your Friends for the first time. So the track I've chosen as my favourite is Great Romances of the 20th Century; the one with the very 80s synth on it. Obviously.