Turn That Noise Down - Faith No More 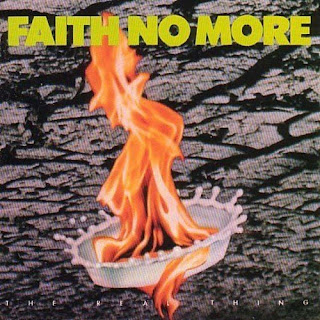 So many well-known albums turn 30 this year and Steve Taylor-Bryant and Susan Omand travel back to 1989 to revisit some of the sounds of their youth that made parents shout "Turn that noise down!" This week, Steve remembers The Real Thing by Faith No More...

I’m not sure there is a better opening to an album than From Out of Nowhere and that one tune encapsulates Faith No More perfectly. If you ever have to pick one song, not necessarily your favourite as that will of course come from Angel Dust, but one to play to somebody who has never heard of the band and want a 3 minute 22 second introduction to the sound of the band, to the equal mix of driving drums and pounding bass, to the uniqueness of Mike Patton on vocals, replacing Chuck Mosley permanently here, to the 80’s sci-fi synth, to the great heavy guitar sounds then From Out of Nowhere is that tune. You won’t find a better opening anywhere in music history and it’s not even the best song on the record!

Track two gives you Epic which I remember hurting my neck numerous times to as a teen, rap metal orchestral greatness. Then the album gives you even more as we move on to Falling to Pieces, a favourite of mine Surprise! You’re Dead originally written in the 1970’s by guitarist Jim Martin and with that early heavy metal feel elevated by Mike Patton’s almost insanity on vocals, and Zombie Eaters that despite its title actually starts as the most melodic love song of the era before building into what I consider the best song on the record. The Real Thing, excellent song, Underwater Love, again really melodic music with Patton uniqueness overlaid, and The Morning After are the next three slices of brilliance followed by the sublime Woodpeckers From Mars, a heavy metal homage to B movie soundtracks in my opinion. The bands cover of War Pigs, one of the best cover songs ever recorded, and the superb Edge of the World close out an album of perfection.

There is not one weak tune, not one slice of filler, just expert musicianship and insane vocals from a band who finally made what they were destined to make... until Angel Dust, which is superior in every way and by far my favourite FNM record.