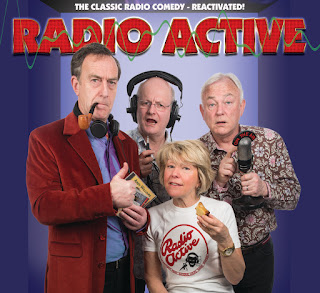 A giant screen on stage has an image of a clock-face telling the exact time, and music from the 1980s is putting a grin on everyone’s faces and making those who know the songs sing along. As the last few members of the audience for this sold out performance take their seats, chuntering in excitement, the house lights slowly fade as the colossal clock hits 7:45pm.

It’s at this point that we’re taken on a journey back in time as the clock hands whizz backwards and the numerical years flash up on the screen over a barrage of audio snippets from the local news programmes (all voiced by the cast), referencing the years as they pass.

This clever aural beginning features some brilliant gags that serve as a warm-up act for the audience; the stand-outs being – for me – the running jokes of two increasingly unlikely celebrities having a denied affair and the truthful reporting of cheeky Disc Jockey personality Chris Evans being fired from whatever radio station has employed him every few years.

When we hit 1984, the over-the-top but scarily accurate radio station jingle kicks in as the news ends. We’re listening to RADIO ACTIVE. 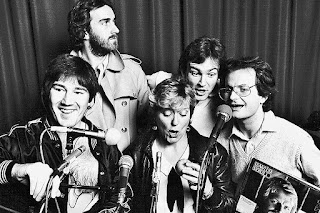 As we’ve gone back in time to 1984, it’s probably a good idea to give a little background to the show I’ve come to see. Broadcast through the majority of the 1980s, Radio Active was a parody of local radio stations that was born out of an Oxford University revue show taken to the Edinburgh Festival by Angus Deayton, Geoffrey Perkins, Helen Atkinson Wood, Michael Fenton Stevens and Philip Pope – with parts of it written by Richard Curtis. After that successful 8-year run on BBC Radio, it made the equally successful leap to BBC Television, to parody the rise of satellite channels, where it was called KYTV.

When digital radio came into force, Radio Active returned for a one-off special in 2005. But, the untimely and sudden death of cast member and co-writer Geoffrey Perkins in 2008 (who is rightly hailed as a comedy guru at both the BBC and Channel 4, producing many classic comedy shows shows) meant that any revival was deemed a little difficult until Angus Deayton said he saw The Missing Hancocks – a radio show tooled for the stage – at the Edinburgh Fringe in 2015 and decided Radio Active might work in the same format.

And he was right. It does.

There’s an added joy in seeing these radio shows performed live, with the performances being as funny as the words and some lovely visual touches that makes this a proper stage show rather than just a straight recreation of an audio recording. The great thing about Radio Active is that the radio channels it parodies are virtually unchanged, so a rich seam of material never stops flowing.

The first Act builds slowly up to a live performance of the Radio Active Drama Repertory Company, who never seem quite ready to go until, finally, they begin to perform Charles Dickens’ David Chizzlenut. They then prove how properly unready they are with fluffed cues, hilarious misreading of lines, amusingly inappropriate or early/late sound effects, and brilliantly realised amateur vocal readings – with a cast at odds with each other and prone to angry whispered arguing. This so evokes the bizarrely egotistical and oddly caustic nature of the am-dram scene that I may have laughed a little too knowingly at those moments.

The highlight of the first Act should really have been this The Radio Show That Goes Wrong version of a made-up Dickens ‘classic’ but, for me, this came just before that when Status Quid were announced with their new tune ‘Boring Song’. This wickedly naughty parody of the simplistic nature of three-chord rock band Status Quo’s records was both spot-on and hilariously funny, with the three members of Status Quid moving and reacting like their real counterparts. The extended ending, where you keep thinking the tune has ended but it suddenly pops back in for another refrain (causing the manhandling of the lead singer in the end to be pulled back into his seat to finally finish), caused louder and louder gales of laughter. 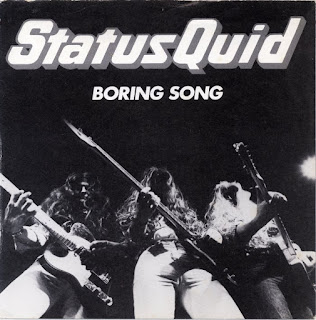 As this is a script-in-hand performance, recreating a recording, it was a surreal moment at the end of Act One for Philip Pope and Michael Fenton Stevens to walk off, leaving Angus Deayton and Helen Atkinson Wood to talk to the crowd; wanting to share some personal moments of this tour (and acting like they were a loving couple).

Of course, the rug was soon pulled out from underneath the audience’s feet when this sincerity was stripped away as each actor forgot their lines and had to keep asking for a prompt (as part of the written sketch, it becomes clear, not for real), which then brilliantly turns into what seemed like a real argument about learning the script (with Helen breaking down into tears). During this uncomfortable exchange, Helen suddenly stops crying to ask for yet another prompt, and you see the gag continue - even when they are both finally trying to say sorry to each other and the audience. The joke gets bigger and bigger, exposing the falsehood of the sometime fake sincerity of actors drawing an audience in with personal soul-baring, and is an unexpected and clever way to end what had been a genuinely hilarious Act One. 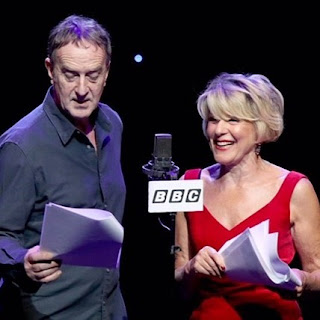 Whilst we’re all having our drinks in the crowded bar at the interval, let’s take a moment to talk about the actors themselves (whilst they’re safely ensconced in their dressing room out of earshot).

You’d think the star of the show would be Angus Deayton, who co-wrote the fantastic scripted material with Geoffrey Perkins, but what has always been evident is what a team player he is and – although sometimes the figurehead – maybe doesn’t always get the moments of character that the others get playing a wider variety of roles. His rugged, laconic charm and rolling-eyed sarcasm plays well as the Maypole for the others to Morris Dance around. He’s the straight man who’s also wickedly funny.

Helen Atkinson Wood, the Helen Mirren look-a-like of comedy, was on fine form as the only female presence – but what a presence. Decked out in a slinky black dress and seemingly not able to age since 1984, her velvet-voice delivers high sarcasm with aplomb and mines the depths of overly-sincere delivery that daytime presenters have with a permanent smile/grimace on her face. She nails every joke and explores several accents, absolutely killing the audience in the Mary and June commercials that intersperse the fake programming. It’s a shame she isn’t employed in the musical numbers but there’s no inequality here as she has a role as large and as important as her male counterparts.

Michael Fenton Stevens, getting huge cheers and much love and ‘awwws!’ as his bumbling, high-pitched, innocently incompetent character Martin Brown, was the most twinkle-eyed of the four performers – engaging with the audience several times in unscripted adlibs and comedy moments that brought out his bearded grin. He bounced around characters with ease, essaying pompous upper class blowhards, middle-aged women and regional yokels with consummate ease – bringing the house down with his ‘warm and reassuring’ voiceover man who publicises his smooth vocal services and then slays the advert with a very naughty punchline to end.

And then there’s musical supremo and all-round human dynamo Philip Pope, creating all the funny radio jingles and spot-on parody songs for the night, with an easy charm and a seemingly limitless array of voices. His lead vocals in the Bee Gees parody (more on that later) was sublime, mining big guffaws with his sudden high-pitched screams. Like Michael, there’s a real sense of a cheeky chap persona who’s clearly enjoying the material as much as the audience. 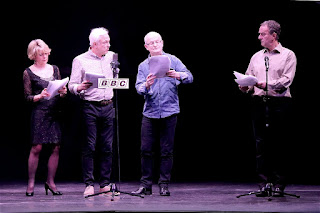 Act Two begins with the obituary of Mike Channel (Angus Deayton), who turns out not to be dead after all as he appears at the side of the stage and fixes Mike Stand (Philip Pope) with a frowning icy stare. This leads into a topical phone-in type of discussion programme that gets more and more surreal as it continues, referencing the previous week’s programming on Radio Active (which allows snippets of each to be heard).

The highlight of those short extracts is the hilarious Martin Brown Pop Quiz, where poor hapless Martin Brown (Michael Fenton Stevens) asks blindingly obvious questions and is always genuinely surprised when his two contestants easily get the answers and the deadlock is never broken. This leads into a ridiculously silly Top Ten Chart Rundown, where Martin Brown gets behind with his announcements and the announcer jingle shouting numerical places gets him even more flustered as it’s clearly pre-programmed and he can’t get back on track. I’ve never seen an audience laugh so hard and - at the same time - feel so sorry for a character on stage! 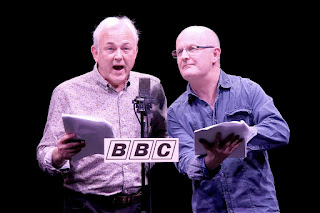 Mike Channel’s Master Quiz mines the same vein as Martin Brown’s Pop Quiz, but with even more ridiculously silly results - which mines the gag that is said at the start about the prize being a luxury chateau in France that never seems to be won. The contestants are confused, the presenter is slippery, and the audience are lapping up every second of it.

It’s genuinely lovely to be in an audience that are so receptive to everything that’s happening and seem to be there to want to laugh rather than wanting to be made to laugh (which can happen at comedy shows). I hope that was as evident to the performers on stage as it was to me.

More musical mayhem follows, via Bob Dylan singing popular classics in his own inimitable style (or was it Philip Pope behind the guitar?) and a live translation of an opera that probably would have offended those that consider opera way too precious an art form to mock!

Then we’re into the final discussion between invited guests and Mike Channel, which plays on Angus Deayton’s deadpan, rapid-fire delivery to bring the show to a confusingly chucklesome crescendo to end. But, before Radio Active is switched off for the evening, there’s just time for the pièce de résistance. This comes in the form of the Hee Bee Gee Bees.

As Helen Atkinson Wood wraps up the show beautifully, leaving Philip Pope, Angus Deayton and Micheal Fenton Stevens to make a quick exit for a costume change, it’s fantastic to see them walk back on in their bomber jackets and gravity-defying white scarfs to take up the microphones as the Cribb Brothers; Gary, Norris and Dobbin. Collectively, of course, known as the Hee Bee Gee Bees (who had their own hit albums and singles, parodying popular artists with searing satirical accuracy). 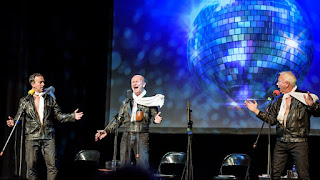 ‘Meaningless Songs in Very High Voices’ is sung, to great delight by the audience (especially Philip’s random high screams), and it’s a perfect ending to what was a perfect comedy show. Being a fan from yesteryear, it’s clear to me that the live version brings an extra dimension to the audio version. I thought I’d miss Geoffrey Perkins cheerful and solid demeanour as the co-anchor with Angus but it’s testament to the strong cast that his presence is missed as a person but – fortunately – not as a performer. I’m sure he’d be delighted with how his chums have re-styled the show for the stage and given it a new lease of life. 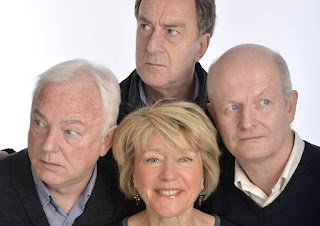 You can tune in to Radio Active again at the upcoming Edinburgh Festival, where they’ll be taking over the airwaves of the Gilded Balloon venue with a completely new show from August 7th to August 24th. I urge you to see them, for fear they’ll shut the station down after this – their second – tour. It’s the 40th anniversary of them performing it on stage in Edinburgh with the Oxford Revue, so they have reason to celebrate and you can laugh with them at the passing of time.