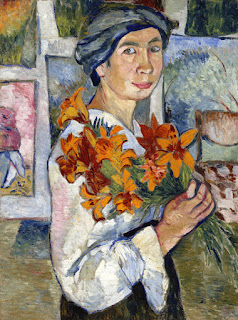 Tony Cross went to the Natalia Goncharova exhibition, now on at Tate Modern...

Before you read much further into this review I should be honest. I am not an art historian. My knowledge of art is limited -mostly- to what I see in front of me, which is a long winded way of saying, ‘I don’t know a lot about art, but I know what I like.’

Prior to about 2003 my only exposure to art ‘in the flesh’ was from rare visits we made to museums when I was a child. This was more like a ‘greatest hits’ approach to art. I don’t criticise anyone for this. Then in 2003 I had something of a crisis. I realised that if you made a film of my life you’d only really need three sets: my bedroom, the office and the upstairs bar of the King’s Arms pub in Covent Garden.* This was depressing. As I pointed out to my friend I lived in London. I was surrounded by culture. There were cinemas, theatres, opera houses, art galleries and more. My life had become pretty much culture free.**

So, my friend and I made a list of all the things we hadn’t done. It started off sport heavy as my friend is a sports fiend but then it widened out to include the arts. I went to an opera for the first time and loved it. I went to the theatre. I went to the cinema and deliberately tried to see not just new Anglo films but art house films, foreign films and classics. And then came the art.

Eventually I decided that the best - and cheapest - way to see as much art as possible was to get memberships. So, I got myself Tate Membership and have never looked back. I try to go to everything. I try to learn as I go. I have discovered a surprising fondness for some modern art that I never expected. I have learned that sometimes it isn’t the most famous artist whose work hits you around the head hardest. 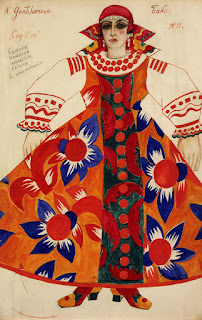 Which brings me to Natalia Goncharova. She is a Russian artist, born in 1881, whose work covers not just painting but designs for fashion, theatre and textiles. She should be an incredibly well-known name, but I had not long heard of her (and I suspect most people who haven’t studied art won't be familiar with her work either.) She lived in Russia and Paris. She worked with the Diaghilev’s Ballet Russe. This Exhibition contains examples of both the designs and the actual costumes from Diaghilev’s production of Rimsky-Korsakov’s ‘Le Coq d’or’, which are magnificent. 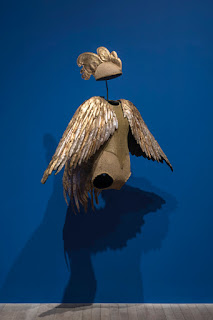 She wasn’t just an artist though. She was an example to others of a new kind of artist. In 1913 she had her own Exhibition at the Art Salon in Moscow. A rare honour for a female artist. And here we are just over one hundred years later and this is only the second solo Exhibition she has ever been given outside Russia. Yet this was a women that not only created art but tried to drive it along through writing and debate.

This Exhibition does her justice I think. You can see the changes and development in her work. You can see the influences, both local and beyond. Perhaps most obviously in Room 6 - Art & Religion - where the Russian icon tradition is given a modernist touch, for example the delightful ‘The Evangelists’ (1911), which is four paintings forming a single work. Then there is her response to the challenge of Futurism, which can be seen in Room 8 - Modernism. 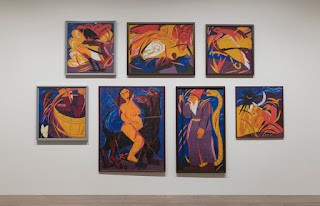 Each room though is deserving of a little time and thought. I tend to move quickly through art galleries. I sweep through waiting for something that will grab my attention and hold on to it. This Exhibition had a lot of those - Bunch of Flowers & a Bottle of Paints (1909), The Forest (1913) and, perhaps the most brilliant work in the whole Exhibition, Harvest (1911). Harvest was made up of nine separate paintings forming a polyptych.*** It has a stunning impact when you walk into the room. It’s colours seem so alive. The original nine paintings are reduced to seven as two are missing presumed lost forever.

I recommend you pop in and take in the Exhibition if you get a chance. You’ll learn more about an artist who probably deserves to be better known amongst the general public that she is. You’ll see some tremendous art touching on and touched by many of the major art movements of the early 20th century whilst trying to carve out her own.

Come and see. I think you’ll find it worthwhile.


*Now sadly no more.
**If you exclude reading, Doctor Who and Brentford Football Club.
***New word for me that.

The Natalia Goncharova exhibition is on at Tate Modern until 8th September. Find out more on the Tate website.