Review - Invasion of the Not Quite Dead 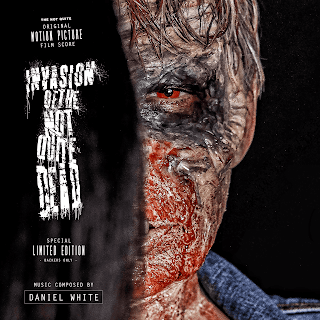 Susan Omand indulges her love of film soundtracks and listens to some of the music for AD Lane's upcoming film Invasion of the Not Quite Dead with The "Not Quite" Original Motion Picture Film Score, composed and performed by Daniel White...

I really enjoy listening to film soundtracks and I often buy them after I’ve watched a particularly good film. I don’t often buy a film soundtrack before I’ve seen the film but I did this time because this is a very, very special film. If you follow our twin site over at The DreamCage you’ll have read about the cinematic genius of film-maker AD Lane and his Herculean efforts over more than a decade to get his film Invasion of the Not Quite Dead out of his head and onto the big screen. [Read Steve’s interview with AD Lane from a few years ago here].

Well, that film is very nearly there now. The main shoot is finished, the final edit has been done and pickups are underway. Cue the work of Daniel White, Film Composer, and one of the most astonishing film scores I have ever listened to; it’s easily in my top five favourite soundtracks of all time.

Now, before you say anything, yes I am probably a little biased, as I know Daniel quite well and have heard tiny bits and pieces of this as it got put together, but, believe me, it wasn’t until I bought the full soundtrack that I truly understood how magnificent this film of AD Lane’s is really going to be.

I say “full” soundtrack but that’s not quite true. In fact, this is actually the “Not Quite” soundtrack, as the full soundtrack will also have songs by the American rock band Wheatus who have been very generous with allowing the use of their music for the film. However, that is to come, for now we have Daniel White’s score as the “Not Quite” Original Motion Picture Film Score for the Invasion of the Not Quite Dead. Pretty apt title I thought. At just over 80 minutes long (the film is currently coming in a shade over 2 hours in length) there are 25 tracks to listen to and the best way for me to describe the work to you is to go track by track. 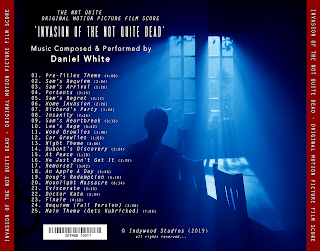 Pre-titles Theme – a very soundscapey (it’s a word) start to the album and also a very 80’s start as it’s synth heavy with an almost post-apocalyptic industrial, Bladerunner-like sound that puts you immediately on edge. There’s a snatch of guitar, which turns out to be the introduction of the main Not Quite Dead leitmotif (a recurring musical phrase that signifies something), there’s birdsong and what bizarrely sounds like a train announcement before a reverse recorded ending to the track which is deliciously disorientating.

Sam's Requiem (film cut) – wow. A complete change in tone, genre and instrument that completely wrongfoots you when you’re not expecting it. There are orchestral strings, brass, pomp and solemnity. This is full on Mozart classicism and it is utterly gorgeous. My favourite thing on the album.

Sam’s Arrival – a solo oboe picks up the leitmotif, but it is soon joined by epic strings and cymbals, topped off with a superb piano. It is the piano and oboe that carry this short track through to its conclusion and you start to realise that this isn’t going to be like any horror film you’ve seen before.

Portents – we’re back among the classical strings to start and an almost finale feel. But then you get a blast of horns and cymbal shimmers and some superb tension inducing silences between burst of strings as you know there is more to come. And what is to come is very Hans Zimmer. There’s staccato strings and wonderful piano with a ticky percussion (I know what I mean) that that just explodes into something that manages to be uplifting and foreboding all at the same time.

Sam’s Regret – if you love classical piano, you will adore the simplicity of this. Add in a soaring John Williams-esque viola in a minor key and the heartbreak is palpable.

Home Invasion – a feeling of melancholy continues through this track as flute and strings pick up where piano and viola left of but there’s an undercurrent of something in the bass that unnerves without ever coming to the surface. Listen carefully and you’ll hear the Not Quite Deat motif return in the low notes.

Richard’s Birthday Party – it may be less than a minute and a half long but, for me, this is the creepiest track so far. There’s something intensely disquieting about lone piano notes echoing in an empty room.

Insanity – Finally that feeling of disquiet gets a focus as an electronic buzz heralds another brilliantly evocative soundscape of metallic squeaks and synthesised swooshes and that ascending slide at the end of the track is absolutely how your head sounds as you teeter on the brink.

Sam’s Heartbreak – There is a real sadness to the synth here and with the rumbles and static of electronic noise overlaying the second half of the track it builds an intense atmosphere.

Lee’s Rage – Electric guitar notes bend round the leitmotif before it goes very Brian May (this is a good thing in this case). I must admit that I don’t get the feeling of rage from it that the title implies but there is an edge. Maybe putting it in visual context will help.

Wood Growlies – is exactly what you’d expect from something called wood growlies as low rumbles echo all around you, moving from speaker to speaker in a very disorientating way.

Car Growlies – yes, this starts exactly like wood growlies but I guess we’re in the car now and the growlies are outside. Just thinking about that gives me intense claustrophobia, so much so that it’s a proper aural jump scare when the guitar kicks in and we get arpeggios that Carpenter would be proud of.

Night Theme – There’s that leitmotif again! It’s quite brilliant. This time though it’s extended on a stunning twangy guitar over an almost dance beat that lifts this way above the, albeit very atmospheric, soundscapes of the previous few tracks and marks this out as one of the main themes of the movie. My second favourite track on the album after the Requiem.

Dubont’s Discovery – there’s a very “insecty” sound here for me that immediately ramps up the tension again. And the heartrate increases as the drumbeat does with very effective changes in volume adding to the fear factor.

At Peace – This is another very John Williams sounding score that brings the end of Raiders of the Lost Ark to mind for some reason. It’s peaceful but you know it’s just the calm at the eye of a storm.

He Just Don’t Get It – An almost bell-like piano heralds the start of… of what? There’s such a feeling of trepidation here and that minor key drop ¾ of the way through is utterly stunning.

Remorse – We’re back inside someone’s head with this soundscape I think. It has the same electronic intensity as Sam’s Heartbreak.

An Apple a Day – again a complete change of tone and feel as we go full on Vangelis rock track with a much more complex synth electronica underpinning the main melody but again the leitmotif is there buried deep down under the drums.

Doug’s Redemption – More gorgeous piano and strings and yet another variation on the leitmotif. There’s still a real threat element to the basses though and this is picked up by the stabby staccato violins and brass but this smooths out as the track goes on and, by the time the guitar kicks in, it is epic, almost triumphal, with marvellous use of clashing cymbals until it suddenly drops to a single piano again and that final hanging note is just sublime.

Moonlight Massacre – There is definitely a nocturnal feel to this one. I love the sparkle of the arpeggiated marimba over the ambient synth and the midpoint, where the key changes and the menace creeps in is very subtle until the high notes drop out altogether and we’re back to a Bladerunnery swooshing synth with an evil sounding (in a very good way) guitar bending over the top. The emphasis of the drums is the most evident it has been in the whole album and really makes a statement here.

Eviscerate – The start of this reminds me of Babylon Zoo’s Spaceman but that is a good thing. It’s a great queasy noise, especially as it shuttles between speakers. And then the frantic drums kick in with a guitar picking up the theme but it’s the background howls, growls and whooshes that really add depth to this track and make it interesting.

Doctor Kate – The John Carpenter sound is back, this time on thunderous guitar as it almost but not quite goes full on prog, especially in the second half of the track.

Finale – The start of this sends shivers down my spine as howling wind gives way to a church organ in something that stays just this side of horror cliché but it’s just utterly glorious. Then, half way through, the orchestra – strings and brass – kicks in with added Brian May style guitar and a gorgeous choir beefs up the sound even more. It’s one of these “throw everything at it” finales but by god it works incredibly well.

To complete the line-up we get two “remixes”. The first is the full version of the Requiem from track two and I’m incredibly pleased we get to hear the full version on the album as the film edit is just a tiny taste. I’ve also been lucky enough to have been granted permission to give you an exclusive listen to this track so indulge, indulge, indulge your inner classicist with the track below.

The final track on the album is “Invasion Main Theme Gets Kubricked” and you can really hear the fun that Daniel White had in composing, remixing and performing this track. There’s vocals, there’s choirs, there’s unsettling discord, soaring strings, thundering drums, strident Wagnerian brass and plaintive flutes. A truly inspired ending to a truly inspired album.

If the Not Quite film score for Invasion of the Not Quite Dead is this good, I can’t wait for the proper soundtrack and the film itself, which is going to be epic. For now though, please please buy this one. I could try to persuade you more by telling you that this is a limited-edition version of the soundtrack, only available until the end of July. I could also tell you that all money goes to the final post-production perfection of the Invasion of the Not Quite Dead film and appeal to your charitable natures. But, to be honest, you really need to buy this one just because of Daniel White’s music.

To listen to some more sample tracks and buy a digital copy of the limited edition of "The Not Quite Original Motion Picture Film Score" simply donate £10 or more to AD Lane's post-production funds using this link (scroll to the bottom of the page to get to the Paypal link to donate).

Images - courtesy Invasion of the Not Quite Dead, AD Lane.