Review - Hugh Jackman – The Man. The Music. The Show. 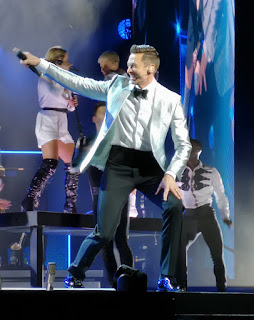 Our own greatest showman, Barnaby Eaton-Jones went to Hugh Jackman – The Man. The Music. The Show at Birmingham Resorts World Arena last month...

With a title like that, the show better be good. And it is. It’s beyond that.

I knew Hugh Jackman was a man at one with musical theatre and stagecraft, alongside his ability to bring charisma and screen presence to any role he took on in whatever film he was appearing in, but I never expected the sheer onslaught of talent that spilled off the stage at the Resorts World Arena.

A clever little precursor was a DJ playing some classic tunes, to get the crowd in the mood, and whipping them into a frenzy as the clock counted down to Mr. Jackman’s appearance on stage. 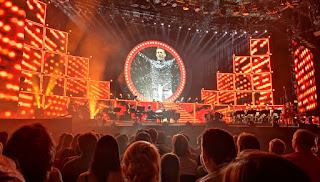 Rising up from beneath the stage, stood as still as a statue, until he fully appeared at the back of the stage atop the bank of steps. He was surveying the scene, unmoving, as the rumbling of stamping feet and the roar of thousands of voices and the wave upon wave of hand clapping washed over him.

And then he began.

From the second he started, to the moment he finished, the crowd were all held in the palm of his huge Australian hands. He drew us in, he made us cry, he made us swoon, he made us dance, he made us laugh, and he made us wish we were his friend. 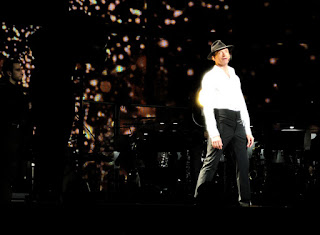 To be able to connect seemingly personally to an audience that large is a particular skill of an entertainer and he’s got that skill in spades. He reminisced about his life, in specific parts of the show (his ode to his wife, with a slideshow of photos across the years, was particular touching), and he was able to draw humour out of every anecdote or story he told as well as baring his heart and soul too.

The show is structured around ‘numbers’ (the numerical kind and the stage show kind). Big numbers. He has, it appears, a skill at recalling numbers and a skill at performing them too!

His tour is just finishing in the UK but he’s still got the rest of the world to go but I can’t see how he’d ever get tired of performing set piece after set piece from ‘The Greatest Showman’, ‘Les Miserables’, and ‘The Boy from Oz’; among many others. 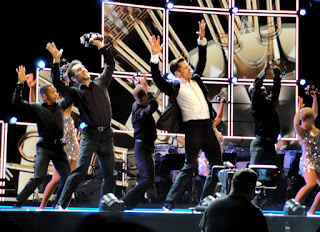 The end of the first Act is particularly moving, as he belts out the famous song which he essayed in the movie of the ‘Les Miserables’ musical, with a rousing finale that involves flags flying and brings the whole show to a crescendo to leave the audience with time to wind down and breath again during the interval.

The only minor niggle I had with Act One – and it really is nit-picking - is him not mentioning the pivotal role of Curly in the musical ‘Oklahoma!’ as it was the National Theatre’s 1998 production of the Rodgers & Hammerstein classic musical in the West End which won him a Best Actor In A Musical Olivier award - and which he was starring in when he auditioned for the producers of X-Men. 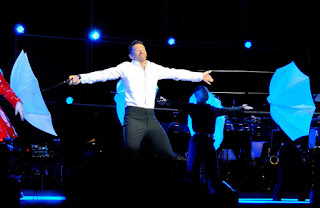 He wasn’t cast in the X-Men film initially but, when Dougray Scott dropped out of the Wolverine role and they needed someone to replace him at short notice, Hugh Jackman donned the claws and changed his own life. He makes a couple of very amusing comments about seeing guys in the audience with Wolverine t-shirts and tells them ‘This is going to be a looooong night!’ and then, much later in the show, pulls a few Wolverine poses at the end of a sequence as photos of him as the pumped-up mutant flash across the huge screens behind him – clearly to appease the fans and then he collapses in giggles afterwards. 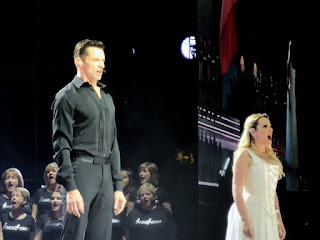 But, for me, his lazy smile and powerful voice in the role of Curly from ‘Oklahoma!’ cemented him as a stage star and I think ‘Oh, What A Beautiful Morning’ would have been a great song to have added to the show but – instead – he references his role as Gaston in a Australian production of ‘Beauty & The Beast’ as his defining stage breakthrough and he performs the song from that. Gaston is also a role that fits him like a glove, with a dance routine that’s a gloriously complicated Oompah with much choreographed clinking of tankards. It’s a showier number and I can understand the switch but it did seem an odd omission maybe for those that know his career.

Act Two begins, perhaps confusingly for UK audiences, as a montage of Peter Allen footage and photos (an Australian singer-songwriter who made it big in America but is perhaps best known to the UK via his co-writing credit on the famous song ‘Arthur’s Theme’ which was the soundtrack to the classic Dudley Moore movie ‘Arthur’). This then leads into probably the biggest production number of the show (certainly in flamboyance alone) as Hugh Jackman reprises his Tony award-winning role as Peter Allen himself from the show ‘The Boy from Oz’. It’s clearly someone that inspired him and he revels in playing his version of the celebrated musician and performer.

Between songs, Hugh Jackman has a wide-eyed charm and sincerity – engaging with shouts from the crowd – and he seems at home there. As Peter Allen, he ramps that up and becomes a witty camp icon and actually goes into the audience to engage with people, bringing one embarrassed gentleman called Jamie up on stage and has some wicked fun with him (ending up butting butts in a dance routine). 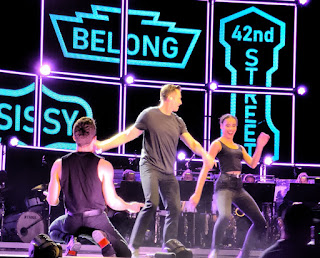 The second half of the show also contains a personal connection to his homeland, with an Aboriginal quartet engaging the audience (and Hugh) in traditional instruments, tongue, and as a message for the world to be more tolerant and more loving. He seems moved by it and, understandably, is at pains to point out the official apology to the indigenous population from the Australian Prime Minister in 2008 and how it was long overdue.

From a sequence to big-time Hollywood musicals (he’s got that classic movie star charm – he clearly was born in the wrong era!) to an upbeat montage of ‘80s songs that had him tap-dancing and drumming, he just didn’t seem to pause for breath. His introduction of the band was lovely and it was clear how close he is with the entire production ensemble, with him rather amusingly saying he regretted the strong curry he’d had with them last night which was now coming back to haunt him. His down-to-earth nature is not an act, nor is his eternal enthusiasm (for his work or his life or his wife), as stories of his generosity and kindness have always surfaced. He just is born to entertain and that’s what he does.

Obviously, ‘The Greatest Showman’ makes an appearance. A mix-bag in critical reviews on reception but the most gigantic sleeper hit with moviegoers the world over, it seems to embody everything about him (especially as it took 8 years for him to bring it to the screen). It’s a gloriously told tale that takes expected liberties of the man it portrays, to give an inspiring message of being and believing in yourself. 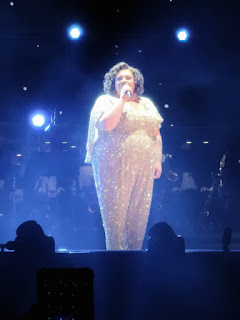 A cameo from Keala Settle (the Bearded Lady in ‘The Greatest Showman’) had the crowd on their feet, as the lyrics and her presence clearly lifted them all. It also was fascinating to hear tell of this particular song – which has become the anthem for many - being written on an airplane ride by the composers as they flew to the last workshop (with photographic proof flashed up on the screens).

I’ve mentioned the screens that adorn the set and the whole construction is an inspired thing, with a runway stretching out from the stage into the audience, and the huge screens creating backdrops that lift each sequence they encompass.

Long-time collaborator Warren Carlyle was the creative director whose vision, along with Hugh’s, makes this show what it is, alongside slick and showy costumes by Tom Ford and some really big and intricate choreography Ashley Wallen.

It ends with the audience being in no doubt that (a) they’ve witnessed a proper theatrical spectacle, (b) that Hugh Jackman is possibly the nicest man on the planet, and (c) that a show where the performers and the star are enjoying themselves immensely translates to an audience doing exactly the same thing.

Find out more about Hugh Jackman - The Man. The Music. The Show here.