News - Songs from the Stage 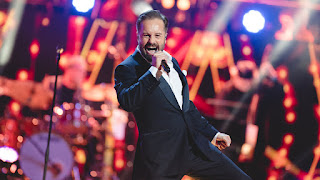 Tony Award winner, Boe and “opera’s coolest soprano” de Niese, will take to the stage on 20th October alongside the Royal Philharmonic Orchestra and conductor Timothy Redmond. They will present a unique performance of best loved songs from the stages of the West End and Broadway, alongside classics from the world’s opera houses.

Alfie Boe OBE said “I’m delighted to be performing with Danielle for the first time and especially at such a prestigious venue as the Royal Albert Hall. Danielle is an old friend and a fantastic singer, so Songs from the Stage is set to be a spectacular evening. The performance will include Danielle’s and my favourite songs from iconic shows with all the energy of a Broadway show.”

Danielle de Niese added “I can’t wait to take to the stage with Alfie. He is a terrific artist and we have been friends for ages, but now for the very first time we get to perform together and we’re planning to really go for it. The show will feature a fabulous selection of opera classics and best-loved numbers from the world of musical theatre. Audiences can look forward to arias from Carmen and The Merry Widow, plus hits from musicals such as Les Misérables and West Side Story. It’s going to be an unforgettable evening and we may have a few surprises in store too!”

This year has proven to be a landmark year for Alfie Boe OBE, as the beloved tenor released his solo album, As Time Goes By. This instant classic further cemented Boe as one of the most successful classical singers of his generation. Boe already has the royal seal of approval, having just been awarded an OBE for services to music and charity in the Queen’s Birthday Honours List. He also performed at both the Queen’s Diamond Jubilee Concert at Buckingham Palace and Her Majesty’s 90th birthday celebrations at Windsor Castle.

Danielle de Niese made her debut at the New York Met aged 19, in Mozart’s The Marriage of Figaro and has gone on to perform regularly at the Paris Opera, the Royal Opera House Covent Garden, the Metropolitan Opera House and the Lyric Opera of Chicago. What a lot of people don’t know is that she starred in Les Misérables on Broadway at the age of 18. Danielle has also recently triumphed in Man of La Mancha on the West End and will be appearing on BBC2 as a Proms presenter over the summer.

Accompanied by the Royal Philharmonic Orchestra and conductor, Timothy Redmond, audiences can expect an evening of laughter, romance, and joyful celebration of stage music.


Priority Booking for Friends & Patrons opens at 10am today. Tickets will go on general sale at 10am on Friday 14 June.
Email ThisBlogThis!Share to TwitterShare to Facebook