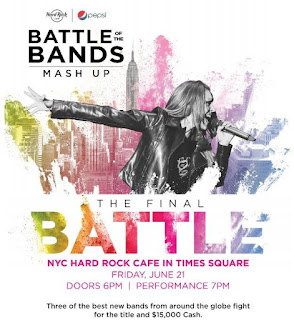 The stage is set for the ultimate music performance – Hard Rock Cafe's 2019 Battle of the Bands Final is on Friday...

Each of the three finalists have received an all-expenses paid trip to New York City to perform in front of top music industry executives at Hard Rock Cafe New York in Times Square on World Music Day, this Friday, June 21st, 2019. There, one will be crowned winner of Hard Rock's 2019 Battle of the Bands competition and take home a $15,000 grand prize.


"At Hard Rock Cafe, we pride ourselves on providing authentic entertainment experiences at our Cafes globally, and the Battle of the Bands competition exemplifies our dedication to finding the gold standard of undiscovered talent," said Stephen K. Judge, President of Cafe Operations at Hard Rock International. "Like the gold standard of our entertainment experience, we also set the same bar for our food, which is showcased in our newly-debuted menu headlined by our award-winning Steak Burgers. We invite fans around the world to celebrate the amazing talent in Hard Rock Cafe's 2019 Battle of the Bands competition as we introduce them to the world stage in Times Square."

Here's what each of the finalists sounds like, so who you would pick as the winner?

Curitiba's Napkin is an indie pop/rock band balancing of fun guitar riffs, well-arranged piano and keyboard lines and harmonies – showcasing the potential of their short but original discography.