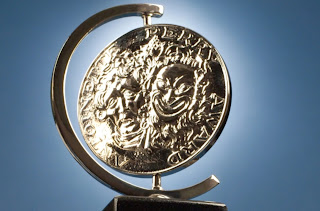 The 73rd Tony Awards were presented on Sunday evening. See the full list of winners for US Theatres' top honours...

The Tony Awards, which honours theatre professionals for distinguished achievement on Broadway, were handed out in style in a lavish ceremony hosted by James Corden, who put his carpool karaoke practise to good use by singing (and dancing-ish) his way through a TEN minute opening number, joined on stage by the casts of Ain't Too Proud, Tootsie, Oklahoma!, Beetlejuice, The Prom, Hadestown, and Kiss Me, Kate... and with a brief interruption from Bryan Cranston.

As far as the awards themselves went, there were no real surprises. Hadestown, a new musical which follows two intertwining love stories—that of young dreamers Orpheus and Eurydice, and that of King Hades and his wife, picked up the majority of the Musical based awards, including the coveted Best Musical and Best Director of a Musical for Rachel Chavkin, who noted she was "the only woman directing a musical on Broadway" this year. In all, the musical gathered 8 from it's 14 nominations, although it missed out on most of the performance categories, with only Best Performance by an Actor in a Featured Role going to André De Shields.

Best Play went to The Ferryman, written by Bond co-writer Jez Butterworth and directed by Sam Mendes, who won his first Best Director Tony Award for his work on the play, having been nominated before for the musical Cabaret. The Ferryman also picked up awards for scenic and costume design making it the big winner in the plays.

There was another "first" on the night too, with Oklahoma! actress Ali Stroker becoming the first wheelchair user to be nominated for, and win, a Tony Award for her role as Ado Annie. She said, her win was for "every kid" with a "disability, a limitation or a challenge who has been waiting to see themselves represented in this arena".

In the Non-Competitive awards this year, The Isabelle Stevenson Award, presented annually to a member of the theatre community who has made a substantial contribution of volunteered time and effort on behalf of one or more humanitarian, social service or charitable organizations, was awarded to Judith Light for her impassioned advocacy to end HIV/AIDS and her support for LGBTQ+ and human rights.

There were three lifetime achievement awards, for actress Rosemary Harris, composer and conductor Harold Wheeler and writer Terence McNally, while Honors for Excellence were handed out to Broadway Inspirational Voices (BIV), a diverse, professional choir of Broadway artists, united to change lives through the power of music and service, theatre executive Peter Entin, Joseph Blakely Forbes, Founder and President of Scenic Art Studios and the FDNY Engine 54, Ladder 4, Battalion 9 which, yes, is the fire-station in Midtown New York that looks after all the theatres on Broadway! Now that's what we call a worthy award winner.


Best Revival of a Play
The Boys in the Band


Best Performance by an Actor in a Leading Role in a Play
Bryan Cranston, Network


Best Performance by an Actress in a Leading Role in a Play
Elaine May, The Waverly Gallery


Best Performance by an Actor in a Leading Role in a Musical
Santino Fontana, Tootsie


Best Performance by an Actress in a Leading Role in a Musical
Stephanie J. Block, The Cher Show


Best Performance by an Actor in a Featured Role in a Play
Bertie Carvel, Ink


Best Performance by an Actress in a Featured Role in a Play
Celia Keenan-Bolger, To Kill a Mockingbird


Best Performance by an Actor in a Featured Role in a Musical
André De Shields, Hadestown


Best Performance by an Actress in a Featured Role in a Musical
Ali Stroker, Rodgers & Hammerstein's Oklahoma!


Best Scenic Design of a Play
Rob Howell, The Ferryman


Best Costume Design of a Play
Rob Howell, The Ferryman


Best Direction of a Play
Sam Mendes, The Ferryman


Best Choreography
Sergio Trujillo, Ain't Too Proud - The Life and Times of the Temptations


Recipients of Awards and Honors in Non-competitive Categories