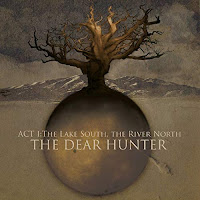 In an effort to further her musical education, Susan Omand has been set "homework" of listening to albums released after the 1980s that she has missed out on. This week she discovers an epic tale...

OK wow. The Acts by The Dear Hunter. Why am I only finding out about this project now?! Thanks to this year’s Educating Omand list, I got tasked to listen to Act I: The Lake South, The River North, which I did (more about which below) and then I listened again. And again. And then found Acts II to V and totally devoured them too. To backtrack a little (and show that I’ve actually done a bit of reading up about this) The Dear Hunter is a band started by Casey Crescenzo, when he was “asked to leave” his previous post with rock band The Receiving End of Sirens. The Acts is a project that evolved from some songs he wrote when he was with TREoS but which didn’t fit with their sound. And evolve it did, into a pre-planned six-part story concept set at the start of the 20th century and following the birth, life and sudden death of a boy, known only as The Dear Hunter, born to a prostitute known only as Ms Terri.

I know, right? Colour me intrigued already! Then I listened to the first Act, The Lake South, The River North, and it completely blew me away. There are only 8 songs on the album but each is different, in style and in sound, and it’s sometimes hard to believe that they come from the mind of one man but in other ways it fits so well together that it could ONLY have come from a single creator. I’m going to do a track by track, looking at the music from my point of view but, because I feel I can’t do the epicness of the story justice, I recommend you read this article from Nick Cusworth on Heavy Blog is Heavy to get a clearer idea of what is going on in the lyrics. To summarise though “The story begins with the birth of the main character. The first act is really about the relationship of the mother and son, and what she has to go through to keep him alive and thriving. She decides to raise him removed from harsh realities, and tries to abandon her life as well, but her selflessness soon turns her back to old habits, and she ruins herself for him.”

Seriously not the start I was expecting for a rock album but all the better for it! A short track of a capella vocal that sounds like Deep South gospel. The harmonies are stunning and some of those minor notes just sends shivers down your spine. Brilliant.

Brass! It starts with an oom pah pah trumpet, how cool is that! It then develops into something that conjures, for me, mental images of an old style fin de siècle travelling circus or carnival with tightrope walkers, ballerinas and ringmasters. It gives me a sense of time and place, Steinbeck’s writing, Cannery Row and Sweet Thursday, comes to mind.

And abrupt drop from the gentility of track 2 and we hit rock. Jazz rock… if there’s not such a thing there should be. At the start there’s a wandering piano that underpins some heavy guitar and fascinating percussion and Crescenzo’s voice is amazing, soaring over the top doing something totally different. I also love the oddly disorientating effect of the bending notes, slurring into one another and giving a fantastic counterpoint to the sharpness of the piano arpeggios which echo the carnival feel of before.

A much more laid back start to this one, again with stunning percussion. Its simple melody allows Crescenzo’s voice to be a lot more understated for the verse and he can do that spectacularly well, with his shift up in volume and tone for the chorus, as the guitars kick in, sounding completely effortless. The harmonies, with almost ethereal backing singers, and synth ambience add a very disturbing feel to the song, in a very good way.

A very light, hippy feel to this one. All acoustic guitars and bubbly synths at the start before it settles into something a bit more, dare I say it, poppy. For me, this is probably the weakest song on the album but that doesn’t mean it’s bad, just that the rest of them are a lot more spectacular, although the prog organ is a bit special. Maybe this is needed as a bit of a rest stop though.

More brass and creepy carnival sounds start this one. Superb honkytonk piano and a song that I actually listened to the lyrics (for once! I don’t usually) because I got hooked by the first line “The pimp and the priest pounce on quickened cat's feet for the freshest young blood” and the marvellous “take me to the river” chorus. This has a real musical feel to it, in that it sounds like it comes for a musical, and that’s meant as a compliment. I can see this being performed on a stage by a cast.

7. "His Hands Matched His Tongue"

The acoustic guitar at the start of this is just gorgeous, I actually love the string noises as this just adds to the genuine feel, and, again, the vocal harmonies are stunning in what begins as a very stripped back ballad and switches, on the point of a single piano note, to a sumptuous lilting lighter-waver with a chorus rich in harmony that would be brilliant live. It actually reminds me a lot of the Beach Boys in their Pet Sounds era and that is no bad thing.

The record scratch throughout this is inspired! It lifts a gorgeous, melancholy piano start to something incredibly special. Add in the darkness of the double bass and I can feel tears in my eyes. But this last track is not just the end of the beginning, it’s the beginning of the end as the audience applaud and the orchestra tunes up, ready to start just as the record ends. Glorious! Just bloody glorious.


As I said at the start of this article, The Acts is apparently a six-part work but Act VI has not yet appeared. There are discussions/arguments online as to whether the latest release, a fully orchestral double album called The Fox and The Hunt is actually the final Act, since it has been included in a limited edition box set called The Acts, but others are saying it is orchestrated versions of the songs from Acts IV and V. Other rumours suggest that Act VI is going to be a film, that a screenplay exists for it. All I can find out for certain is that, according to Crescenzo himself in a statement on the website in 2015, Act V “will be the final ‘rock’ record in the Act series. This may read as though I am abandoning the project, one record early - but the truth is simply that in knowing what Act VI means to the series, and what its story has to say - presenting it in the same form as Acts I-V would be short selling the creative opportunity it presents.” All I know is, there better be SOMETHING to finish this epic project off successfully!

In the meantime, get on board the start of The Dear Hunter’s story and listen to Act I - The Lake South, The River North. Here’s the very first, very short, track to get you started. You will be hooked before it finishes.