Turn That Noise Down - Tin Machine 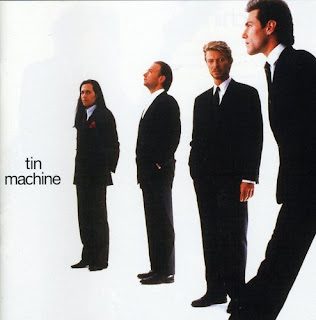 So many well-known albums turn 30 this year and Steve Taylor-Bryant and Susan Omand travel back to 1989 to revisit some of the sounds of their youth that made parents shout "Turn that noise down!" This week, Steve bows to the machine...

On the 10th January 2016 the world fell silent as it mourned the passing of David Bowie.

Terms like icon and legend are banded around liberally nowadays but could have been invented to describe Bowie as both a performer and a man. The world shared anecdotes and music and videos and, for the first time in a long while, it felt like the inhabitants of our planet had become one. The sad passing of David Bowie had brought us together as Ashes to Ashes and Let’s Dance and anything Ziggy related was played on constant loop. Except in my house. I was as saddened and devastated as the next person but it was a particular era of the Bowie discography I turned to for therapy and that album is 30 years old this month and here I am reminiscing again but struggling to get into the mindset of the 13 year old boy I was when I discovered Tin Machine, struggling to review the album from the point of view of a critic, struggling to string together these sentences without tears.

Everyone has their favourite Bowie, a favourite album, a favourite hit single, a B-side they discovered by accident and none of you are wrong with your argument that that particular album or tune is the best. Bowie didn’t do bad, he didn’t do mediocre. You can’t argue with someone about which Bowie is the best, that was the power of the man; he was whatever you needed him to be at the time you discovered him.

I’m not going to give you a track by track breakdown of the Tin Machine record, I’m just going to tell you that every track on it has played a part in my development of the adult sat here today. Some made me cry, some lifted my spirits, some dragged out something creative in me, and some explained how I was feeling or what I thought better than I could word myself. I don’t have a favourite song on the record, as explained they are all meaningful in their own way but perhaps Under the God is most apt to share in the current state of the world since David Bowie left us.

White trash picking up Nazi flags
While you was gone, there was war
This is the West, get used to it
They put a swastika over the door